If you follow my work you'll know that my portfolio is divided between commercial photography, where I work with businesses and organisations creating images for advertising and marketing, and fantasy art photography where I love storytelling through images. This blog is about a photoshoot I did in June 2014 but until now have only shown a couple of images in my portfolio.

For a long time I had wanted to create a series of ethereal images inspired by Lord of the Rings and set in an amazing location with rushing water and breathtaking scenery. I spent a while looking for the right location until I discovered Wyming Brook in South Yorkshire which was 180 miles away but looked ideal for my fantasy photoshoot. I had a model in mind who I thought would be perfect for the role. I'd worked with Sasha Wright on many shoots creating bohemian, lifestyle, lingerie and corporate images. Thankfully Sasha agreed to take part in my big adventure along with photographer Emma White who was to be my assistant for the day as well as help film behind the scenes footage.

Despite our very early start I remember we were all very excited as we made our way down the path towards the brook. Carrying the props and camera equipment we could hear the sound of rushing water in the distance. This actually made talking to each other during the shoot difficult at times as the water was so loud but such an amazing location to shoot at.

When it came to styling we had been kindly lent a dress by Frances Mahon, Oasis Wedding & Celebrations, which had the perfect look for my first theme which was inspired by 'Galadriel' played by Cate Blanchett in Lord of the Rings. 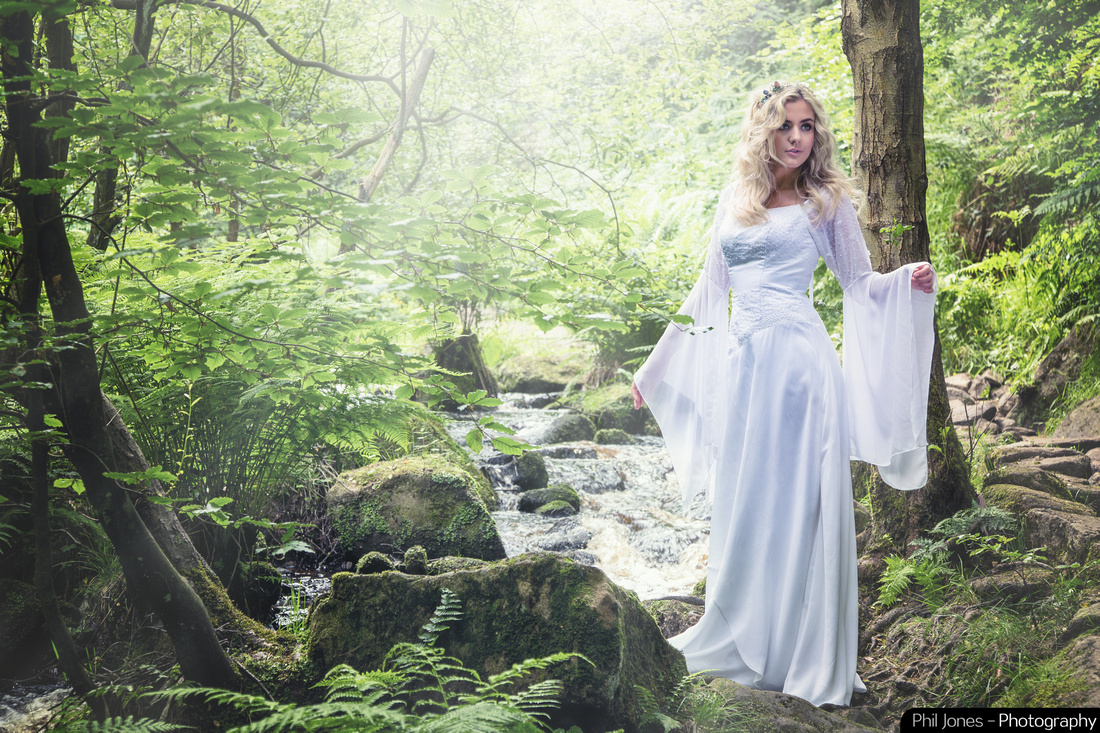 Final retouched imageFinal image after being retouched in Adobe Photoshop.

This was also one of my first shoots with my then, new camera, a Canon 5D mkIII, fitted with a Canon 24-105mm f4 L Series lens. I also packed my classic 5D mkI and a Canon 70-200mm f2.8 lens. For lighting I used a Canon 580EX Speedlite both on and off the camera. When shooting off-camera I used a Bowens Pulsar transmitter to fire the flash which is great when working outdoors in daylight. Emma is a genius with a reflector which she used to bounce silver light. For some shots I used my Manfrotto tripod which is such a sturdy tripod and great when shooting outdoors at slow shutter speeds. 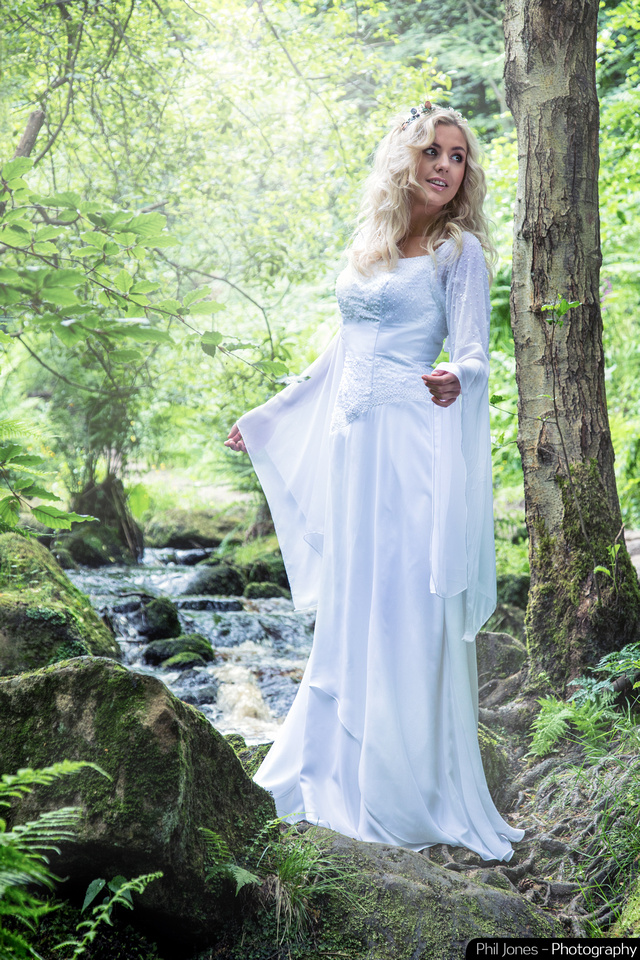 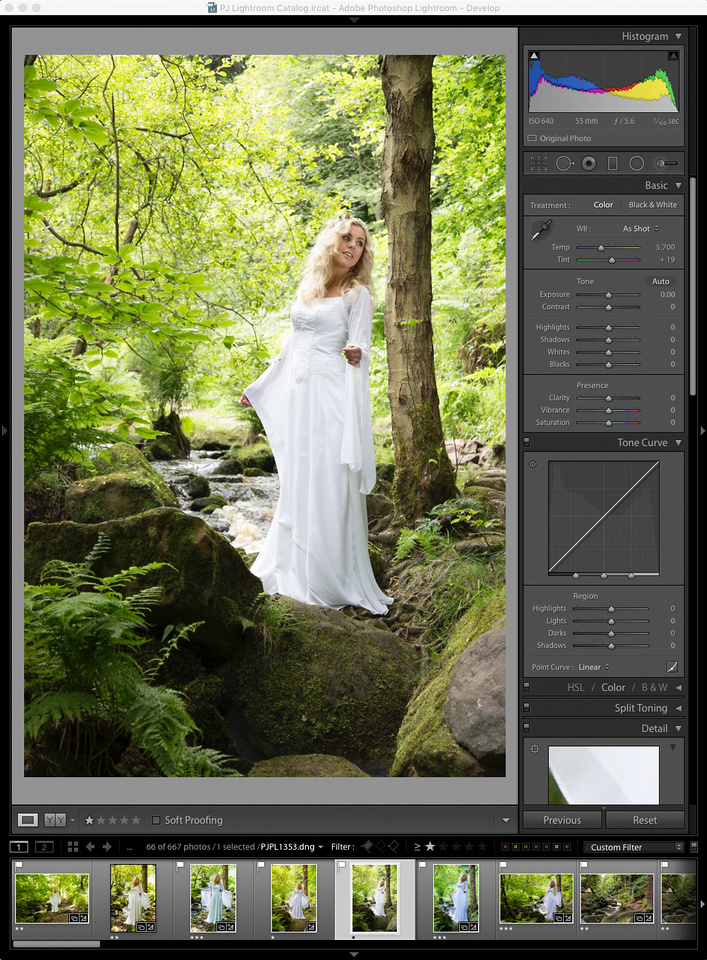 Un edited imageA raw file in Adobe Lightroom without retouching showing how the image was shot.

Above: A raw file in Adobe Lightroom without retouching showing how the image was shot. 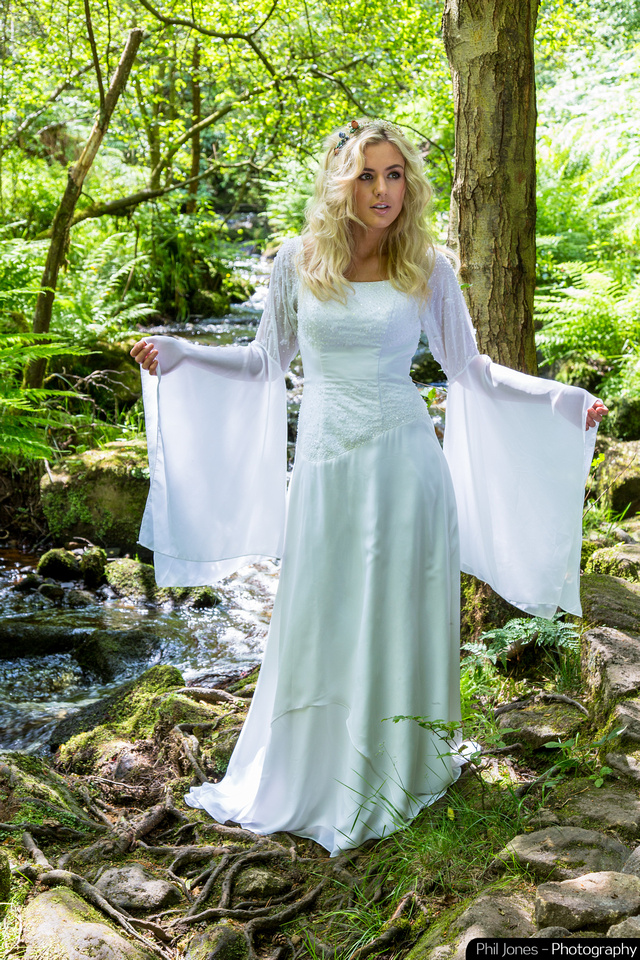 Raw fileAnother raw file without retouching showing how the image was taken.

Above: Another raw file without retouching showing how the image was taken.

The second look or theme was an Elf wearing light decorative body armour and hunting the land for food. The decorative top was supplied by Rachel Burnett who had hand-made the piece. I modified some belts I found in a charity shop and made the hairpiece, the skirt came from Primark.

It was great fun shooting in the water, finding low angles and bring my best not to drop my new camera in the water. I wanted to make the scenery a character in the story as it's not everyday I get to work in a location as spectacular as this. Along with my props I also took a trout! Although it wasn't Sasha"s favourite prop she'd ever worked with we certainly got the shot I imagined! 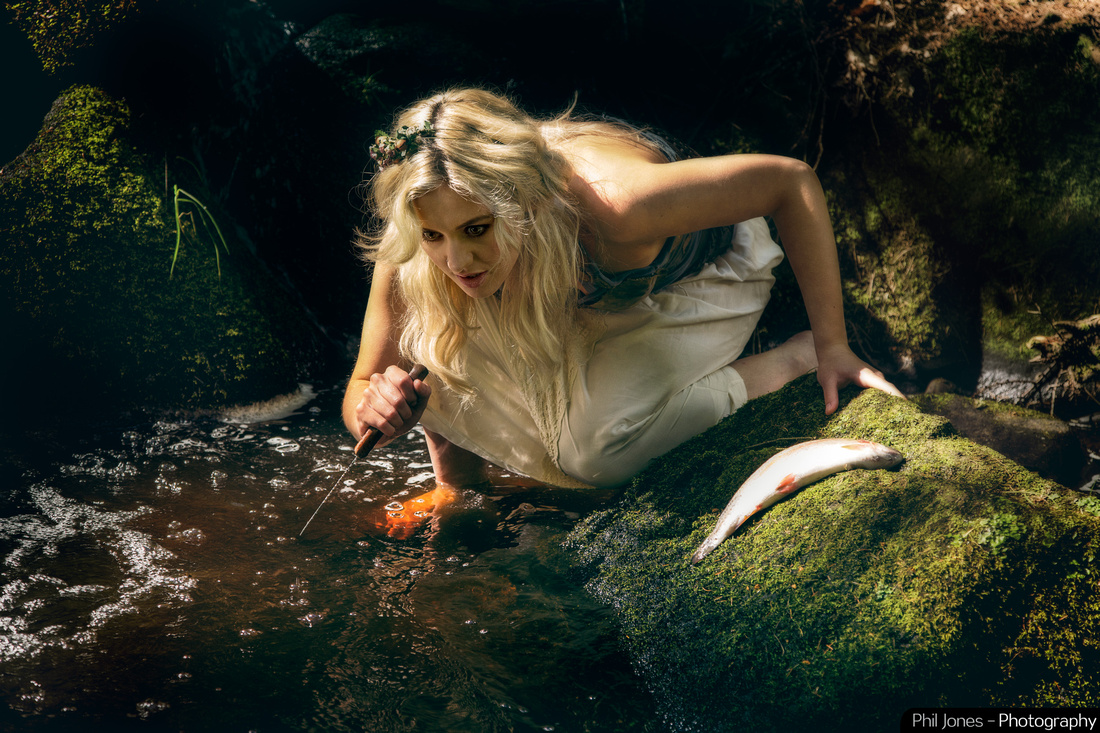 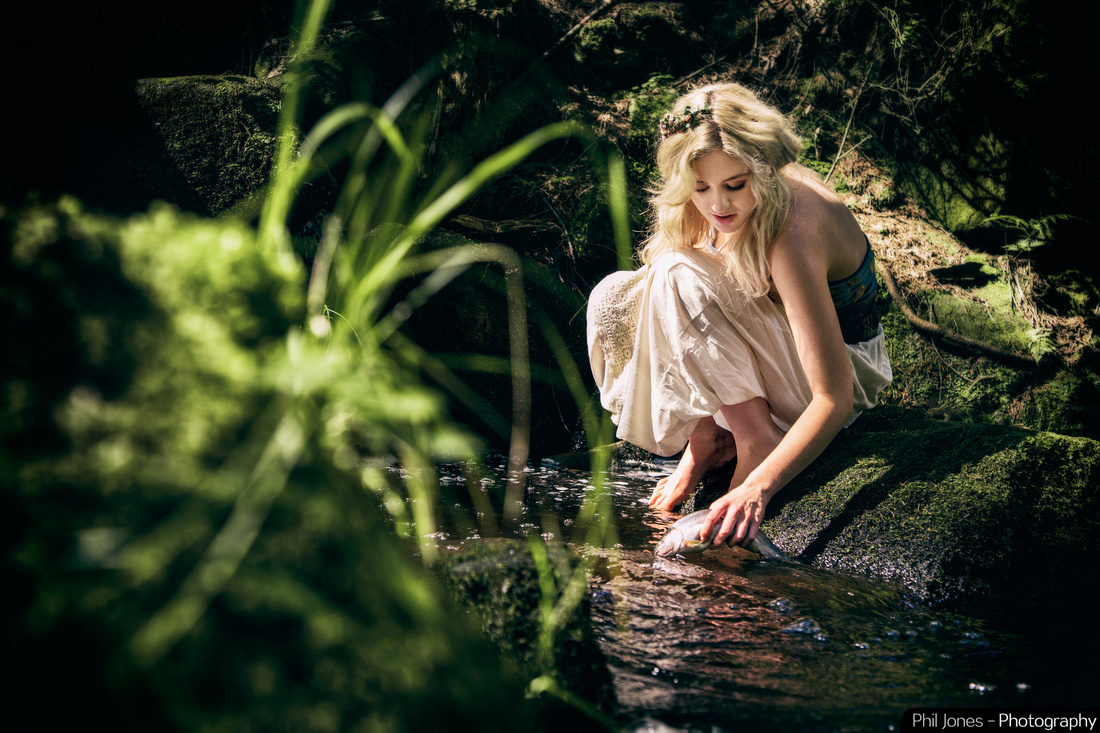 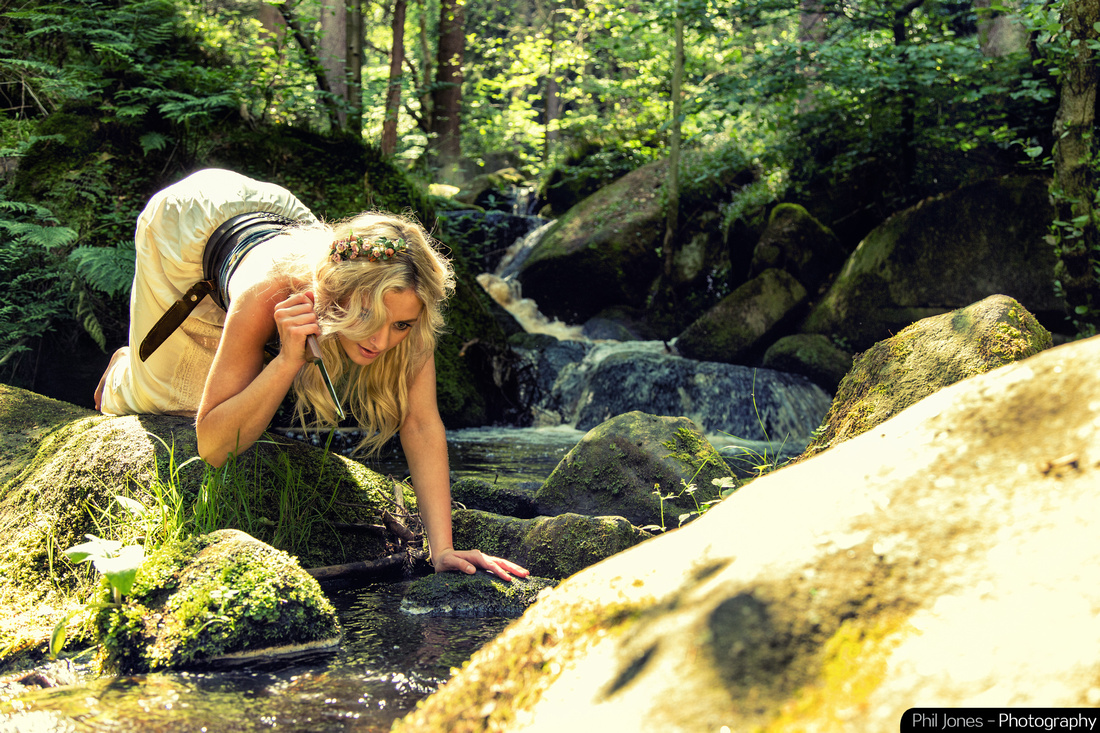 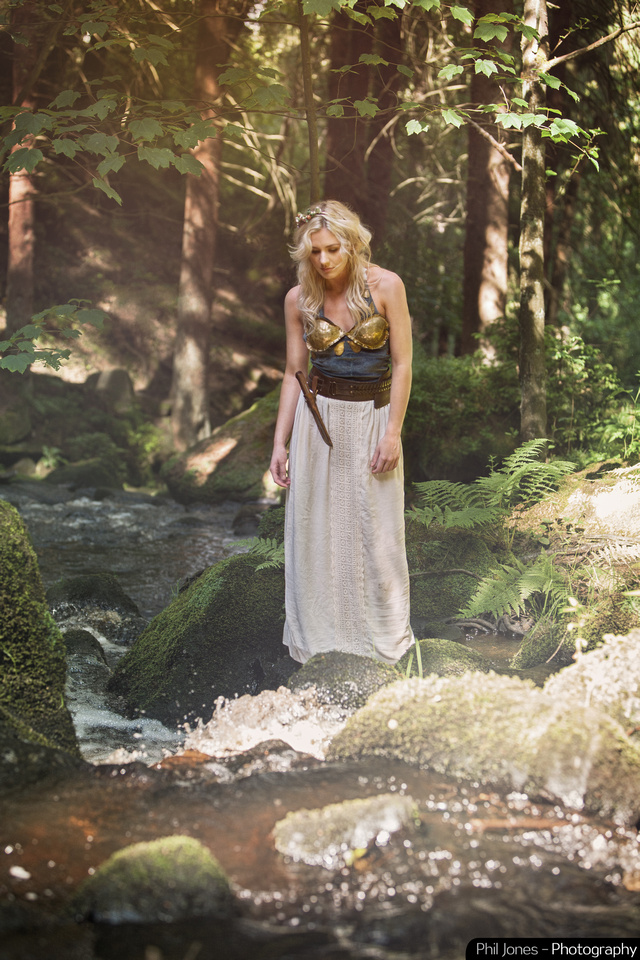 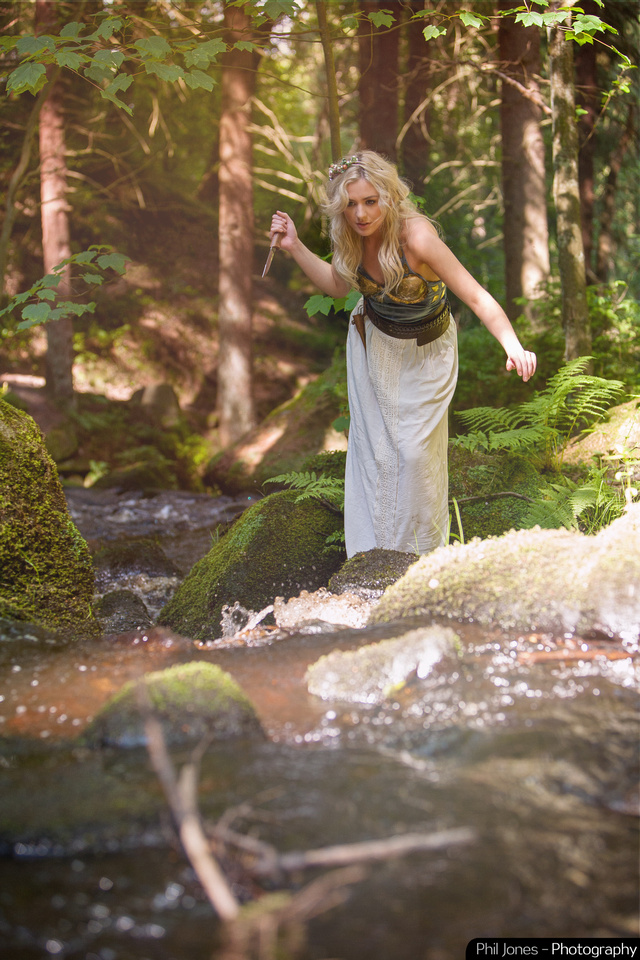 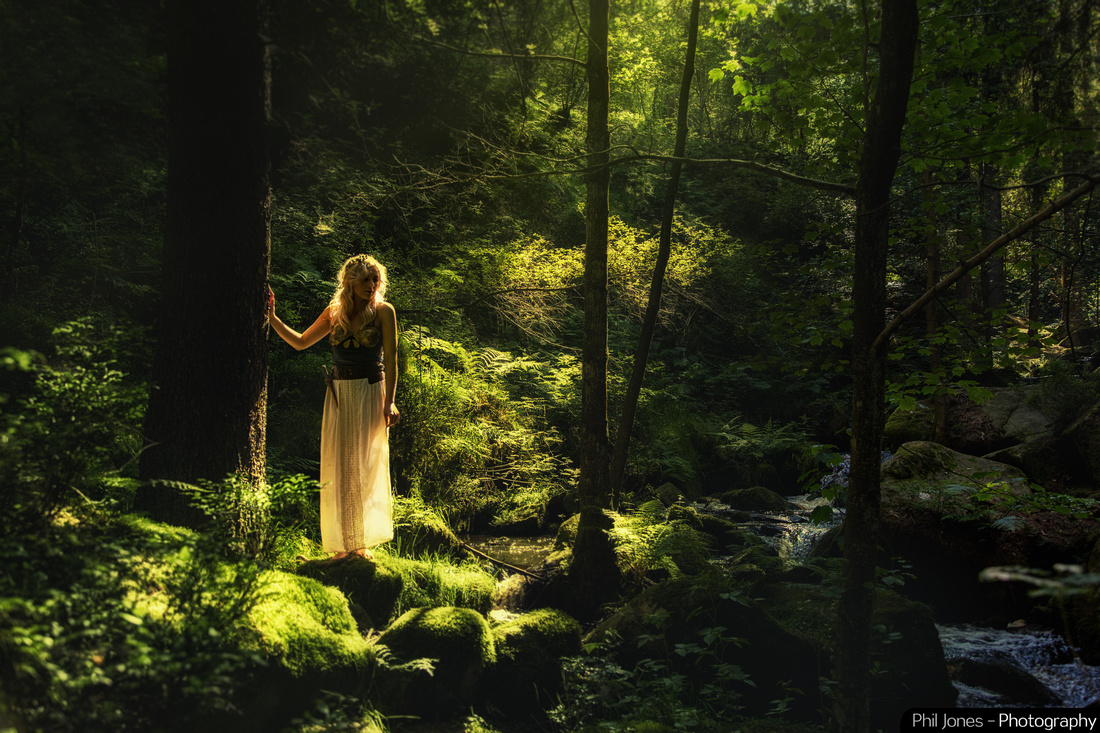 The final look we created was a Woodland Elf who moved effortlessly through her natural environment. As you'll see on the video, we didn't exactly move effortlessly but who would know when you're looking at the final images. Although it was now early evening, it was still quiet light as it was the middle of June, so to create the feeling of dusk I retouched the images in Photoshop and created custom filters using Nik software. 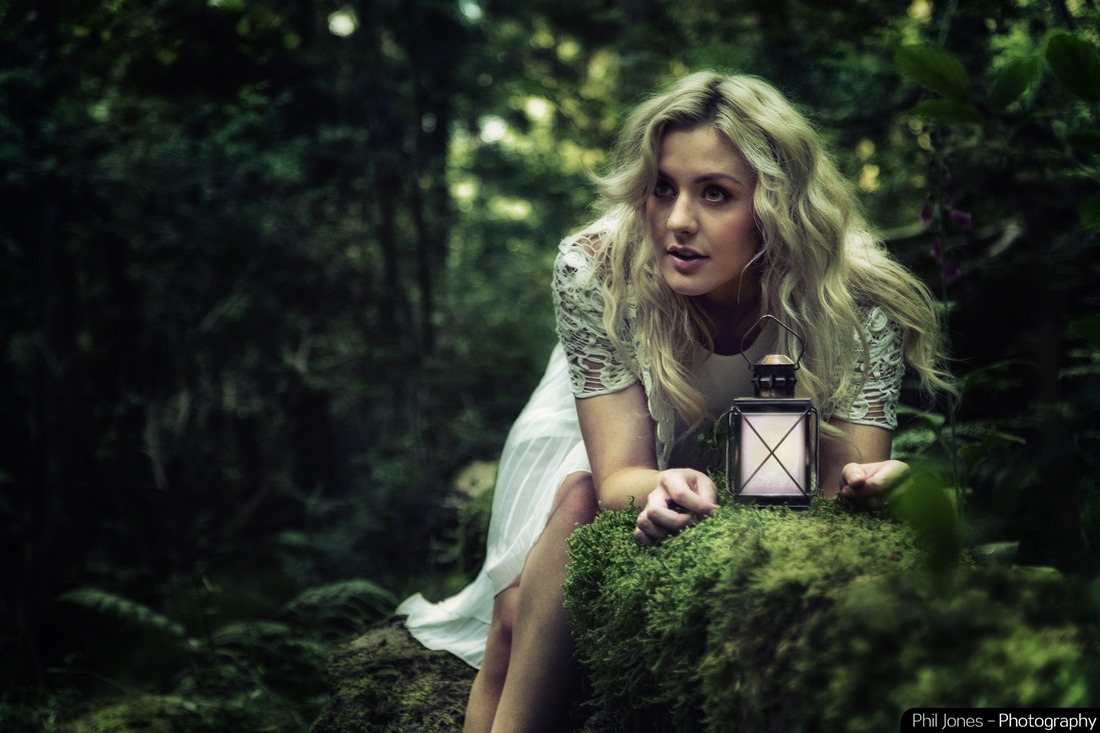 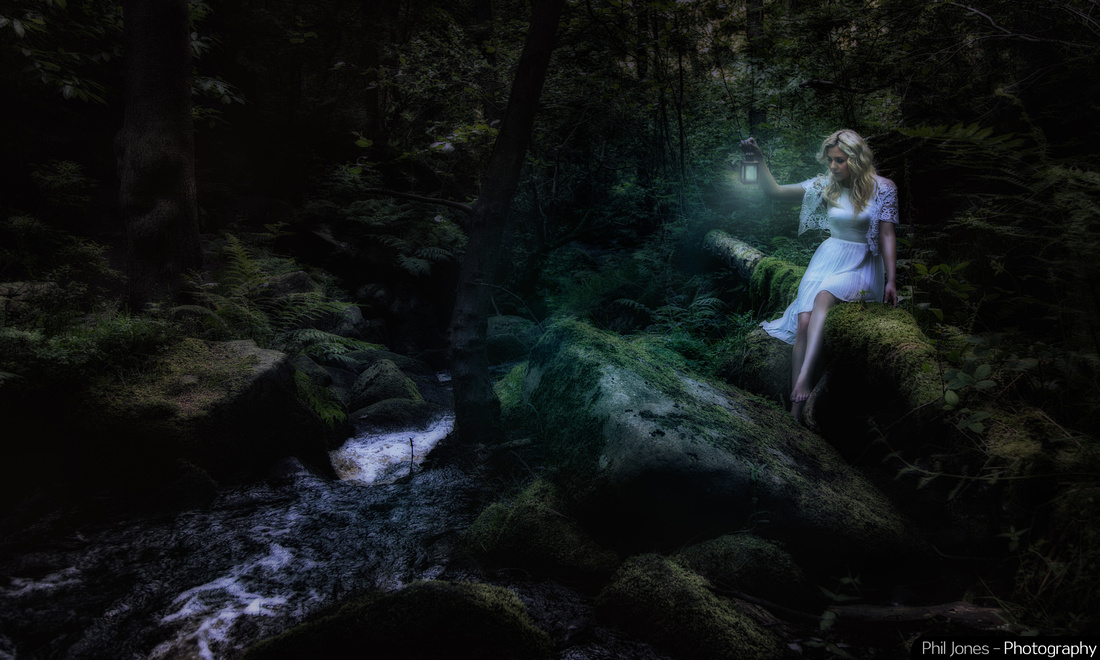 Below: Behind the scenes video

It just leaves me to say thank you to everyone who helped make the shoot happen:

I hope you like the behind the scenes video, if you have any questions or comments, leave them in the comments and please like, and share and don't forget to subscribe to my channel for more videos. 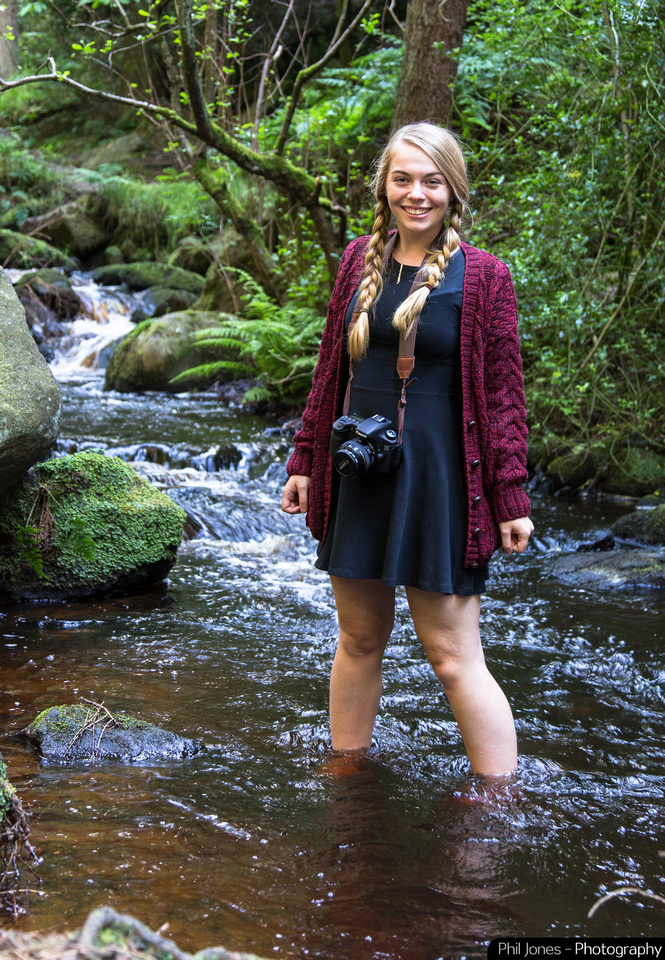 Above: Behind the scenes with my friendEmma White.

Below: Tired but happy. The end of a long day. Images are not to be used without written permission. All images are available for commercial use. Please contact me for more information.