How to improve your sports photography: I spent a weekend shooting the British Superbikes 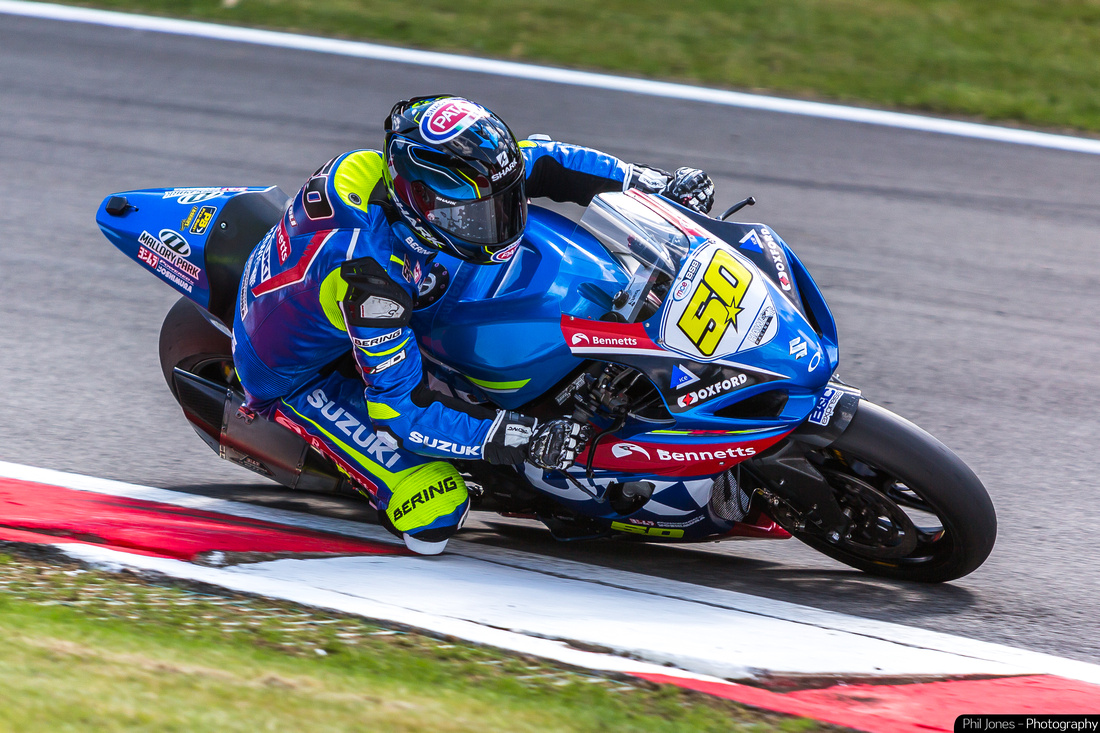 If you are a regular follower of my photography then firstly I would like to apologise for not publishing a blog for a while. One of my excuses is I have tried to take time off at weekends and balance my work/social life. To help with this I have got myself back on two wheels, a Suzuki GSR 750 to be exact and I'm lovin' every minute of riding again!

This brings us on to the weekend of 21-23 July 2017 where I decided to buy a weekend ticket for the MCE Insurance British Superbike Championship, Brands Hatch GP, take my bike and camera, and have some fun! Yet again I found myself trying to balance relaxing and enjoying the moment, opposed to using my camera and 'working'. My biggest problem is I love what I do, so a weekend racing became a bit of 'Busman's holiday'. Although I have experience shooting images at the MotoGP (thanks to Claridon Shipping who sponsored a 125cc and later Moto 3 team), I am not an expert in sports photography. What I found at Brands Hatch were plenty of amateur photographers who follow BSB up and down the country to the various racing circuits. I found myself chatting with them over the weekend and picking their brains to which camera settings they were using and found it interesting that they all had their own method of shooting. I think this varies depending on what equipment they had and of course what style image they wanted to create. I would like to share a selection of my images from the weekend and explain my set-up, which if you are new to sports photography may help you. 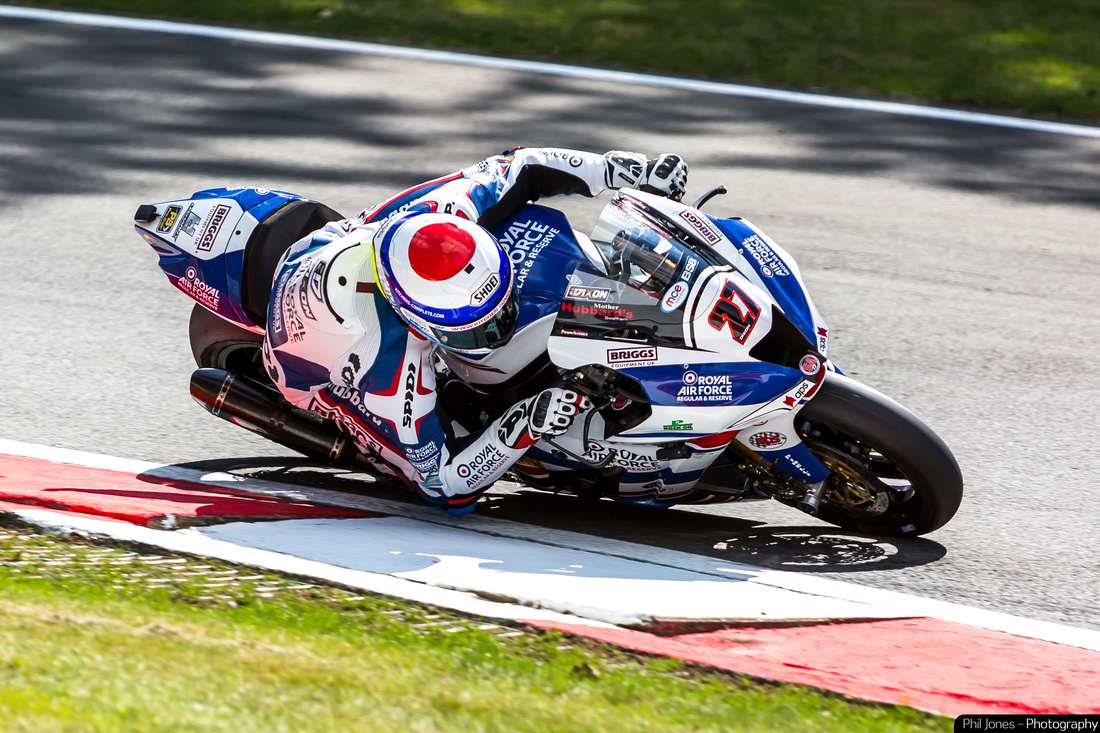 I'm shooting with a Canon 5D mk3 with a EF f2.8 70-200mm Lens. If you're thinking of buying a lens, my advice is get the best you can afford. A Canon EF 70-300mm USM IS Lens would be a great lens for sports photography as it gives you the option to zoom in close or take a wider shot. Someone kindly let me experiment with his 300mm prime lens which was amazing but personally I like to be able to have the option to pull back a little especially as many of my shots get used on websites where aspect ratios are different and a tight shot wouldn't work. It's great to fill the frame but these days you can always crop tighter afterwards and not lose quality for web.

Set your camera to burst mode or continuous high speed. Although I usually take one or two images at a time, it's good to have it set up in case you need it for unexpected racing incidents, more of this later! Without a doubt use AI Servo Focusing mode which is best for shooting moving objects. When you partially depress the shutter button, the lens focuses on your subject and will continually refocus if the subject moves and the focus point changes. Take a look at the link at the bottom to read more from Canon on this subject.

Focusing. My technique is to use one single focus point and to position it on the riders crash helmet to create a sharp image. Some photographers use multiple focusing points but as I always focus on the eyes when shooting models this was to be no different. As the bikes approached the 'U' bend of druids, a second gear bend - 60mph. I would pan my camera and follow them throughout the turn.

Shutter speeds. This will of course change depending on how fast the action is and again how you want your image to look. Let me explain by showing a few examples. I would recommend 1/500 or 1/640 is a good place to start. Set your camera to shutter priority, dial in one of these speeds and let the camera pick the aperture or f/stop. When shooting at these shutter speeds it creates a sense of movement from the bike as the tyres and wheels are revolving much quicker than the forward movement of the bike. The faster the shutter speed, the more you will freeze the action. At Sheene Curve for example, (a third gear corner - 100mph or faster), I found myself wanting to use a faster shutter speed when the bikes were at a quicker part of the circuit. Also during qualifying or on race day the riders' speed will increase to that of a practise session. It's also a lot harder to follow the rider as they approach Sheene Curve making the camera pan shorter. 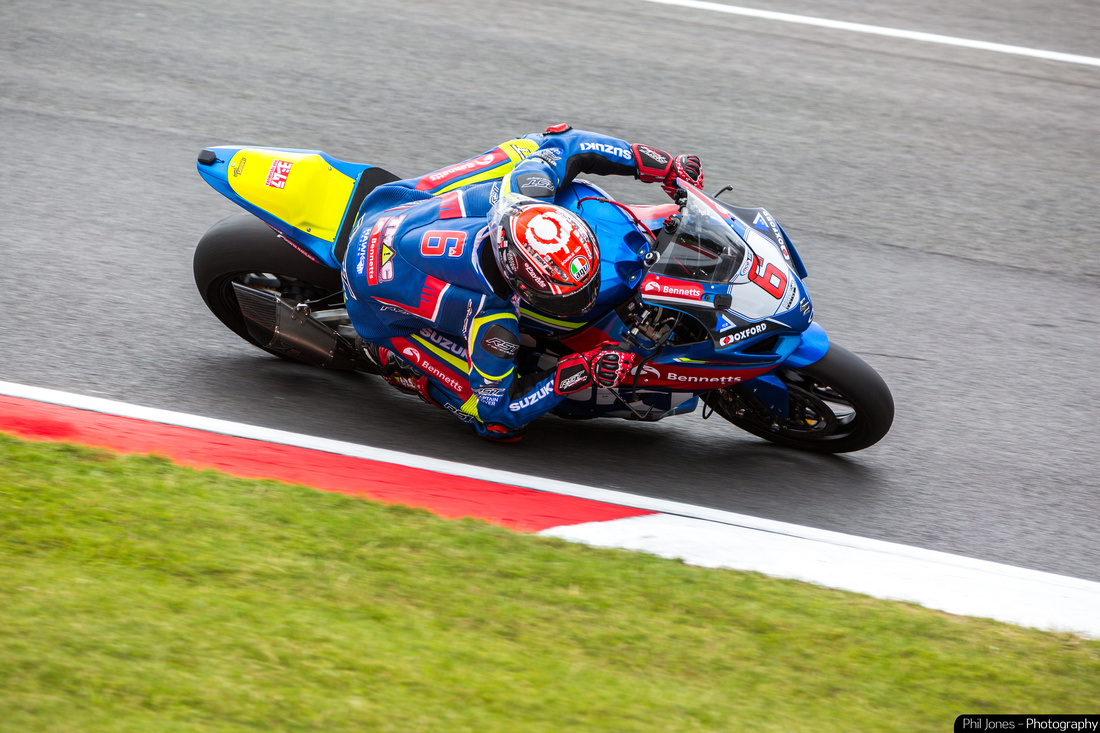 Above. Taylor Mackenzie. I started the day at 'Druids' which is a relatively slow bend and this location gives you the opportunity to get close to the riders. The settings for this shot were 1/640 sec, f7.1, ISO 400 but I used my x2 lens converter at 220mm.

Below: Still using the image converter but at maximum focal length of 400mm, these two shots were taken using continuous shooting mode and have not been cropped. This is where panning the camera helps keeping the bike in shot. 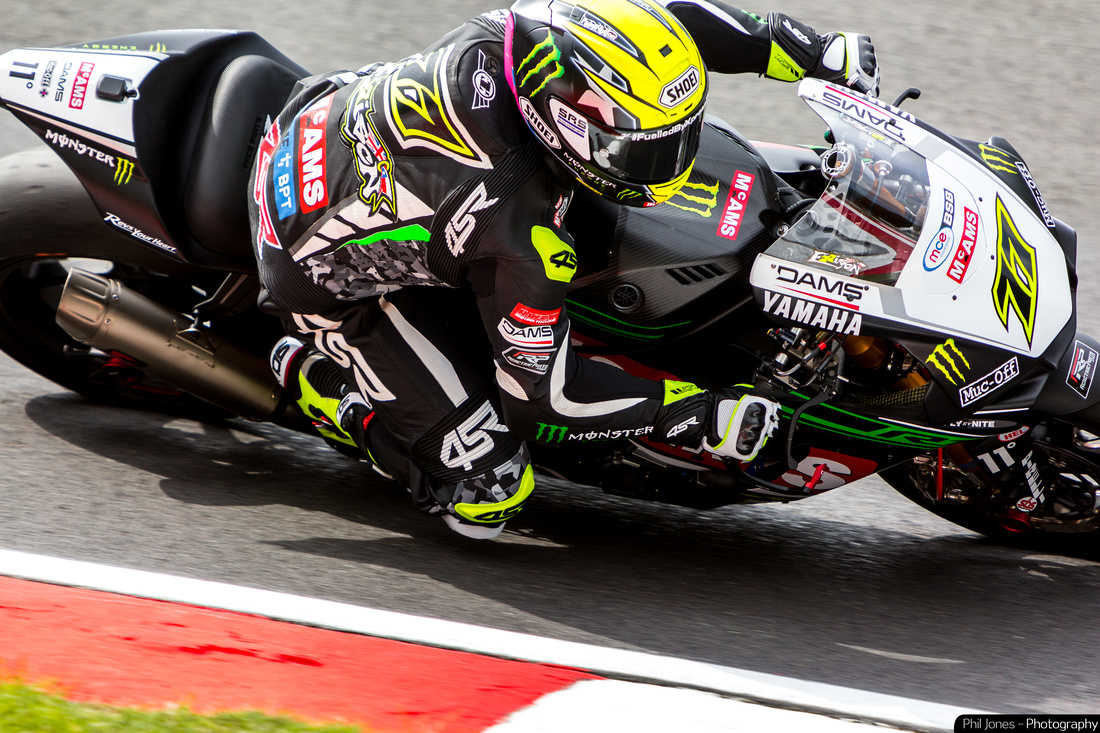 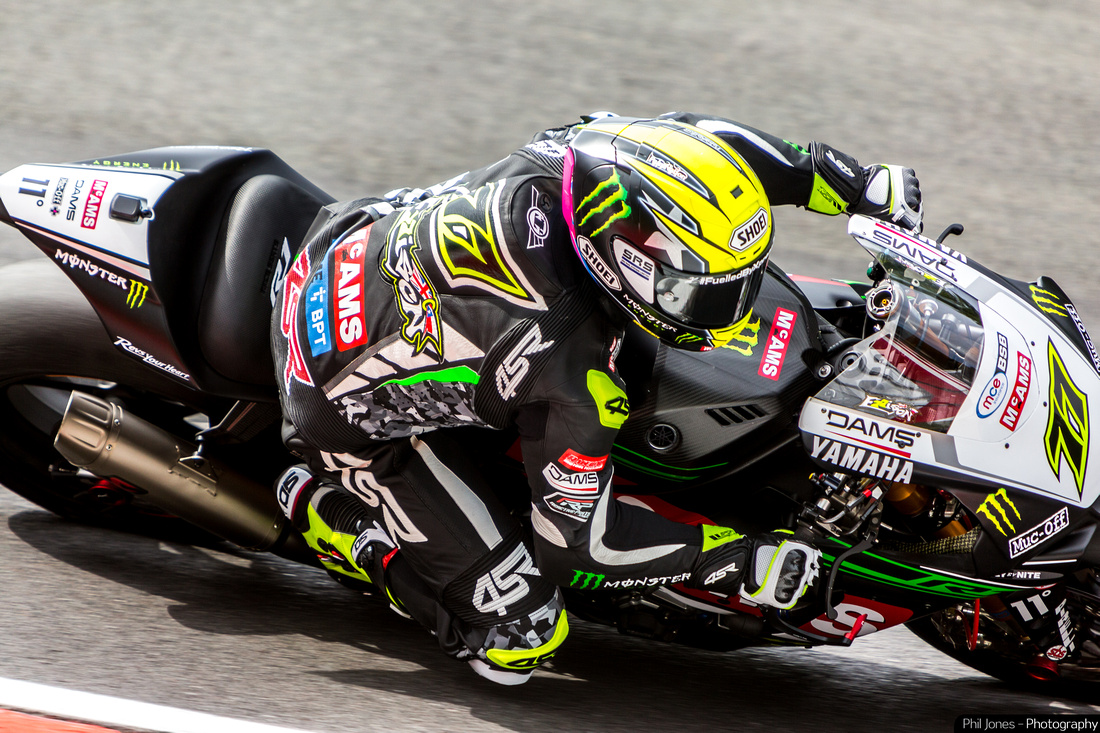 Apertures. As I mentioned earlier when using shutter priority the camera automatically selects the aperture and creates some stunning results but this will vary depending on the light conditions. I have shots at f2.8 through to f16! The evening of day 1 I looked at my images in Lightroom and thought f6.3 worked really well for the style of image I wanted to create. The next day I experimented further setting the camera to manual, selecting f6.3, a shutter speed of either 1/1250, 1/2000 or 1/2500 but then selecting Auto adjust on the ISO. This is the first time I've ever used Auto ISO as I like to keep the noise or grain down to a minimum but I know from experience if I print an image at ISO 1250 you will not see the grain. When shooting with Auto ISO I kept an eye on the ISO and made sure it didn't get too high. I also found it very interesting chatting to other photographers to whether they use the lens image stabiliser. Some did and set it to mode 2 for panning but others said it wasn't necessary and they found it slowed down focusing. Again I tried both and personally found Canon's image stabiliser worked really well. 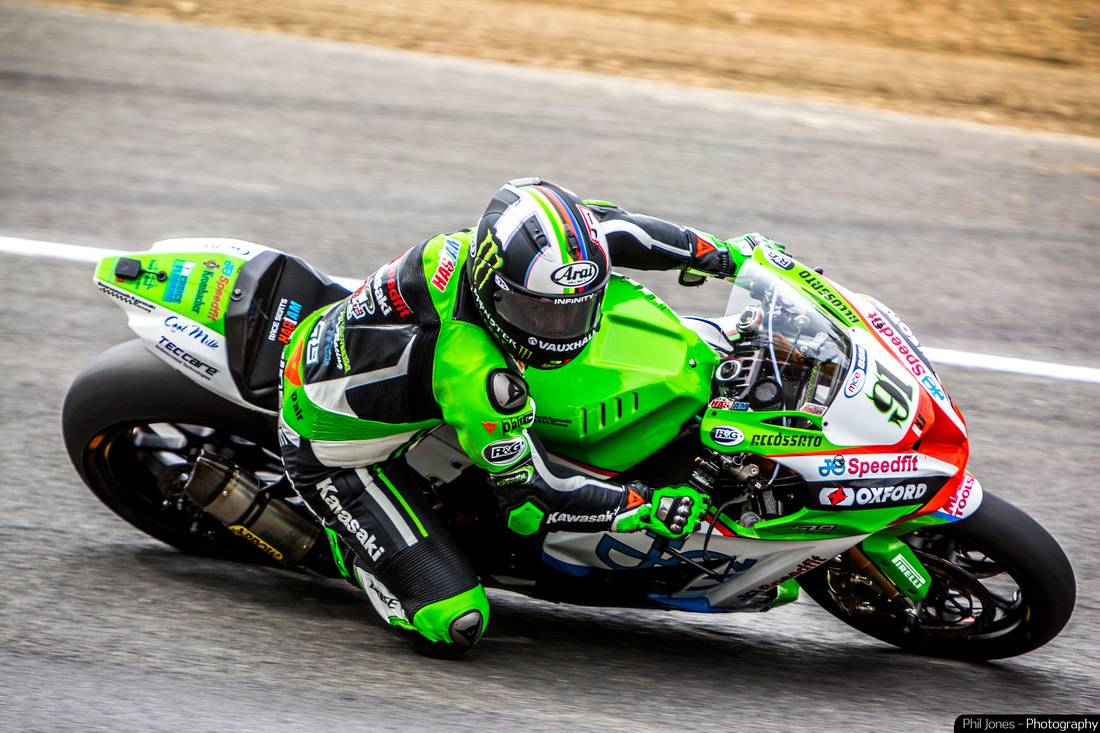 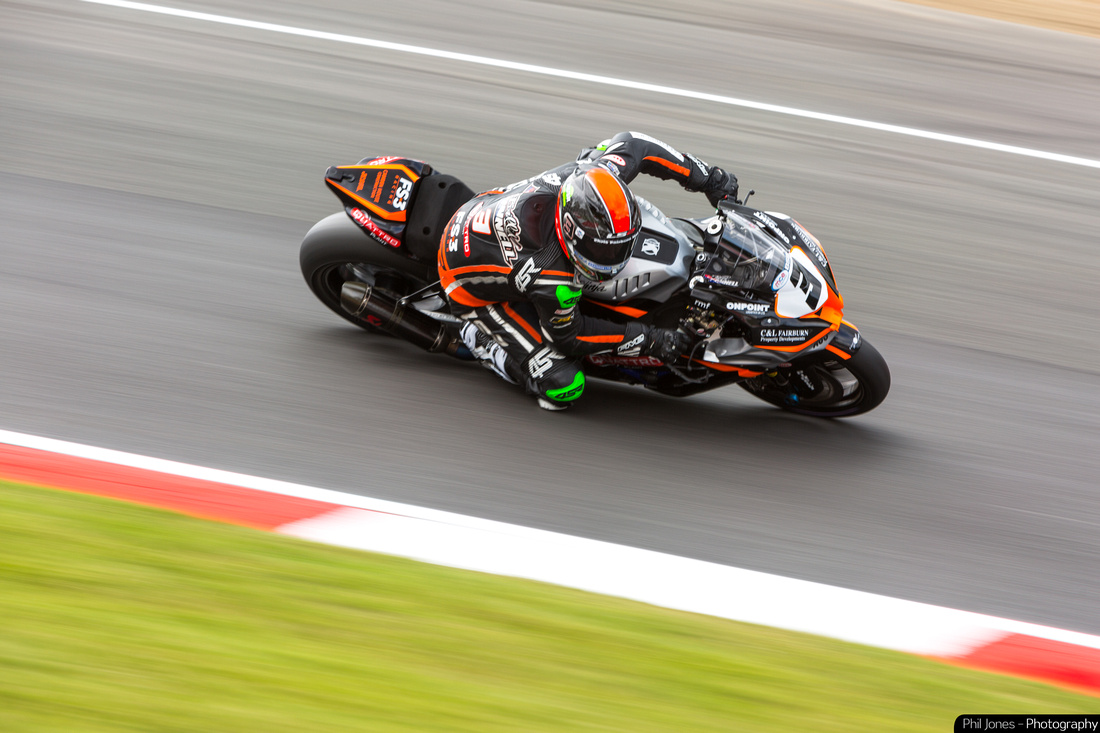 Above: Here I moved to as the riders were exiting 'Druids' and I slowed the shutter speed right down to create an image which shows the speed and excitement of racing. Here I shot rider Billy McConnell on his Kawasaki at 1/60 sec using shutter priority mode (TV on a Canon). f9.0, ISO 100, 200mm Although there's a little movement on the rider I personally love the shot.

Below: I tried the same technique but shot at a faster shutter speed of 1/125 on Shane 'Shakey' Byrne on his Be Wiser Ducati Panigale R. 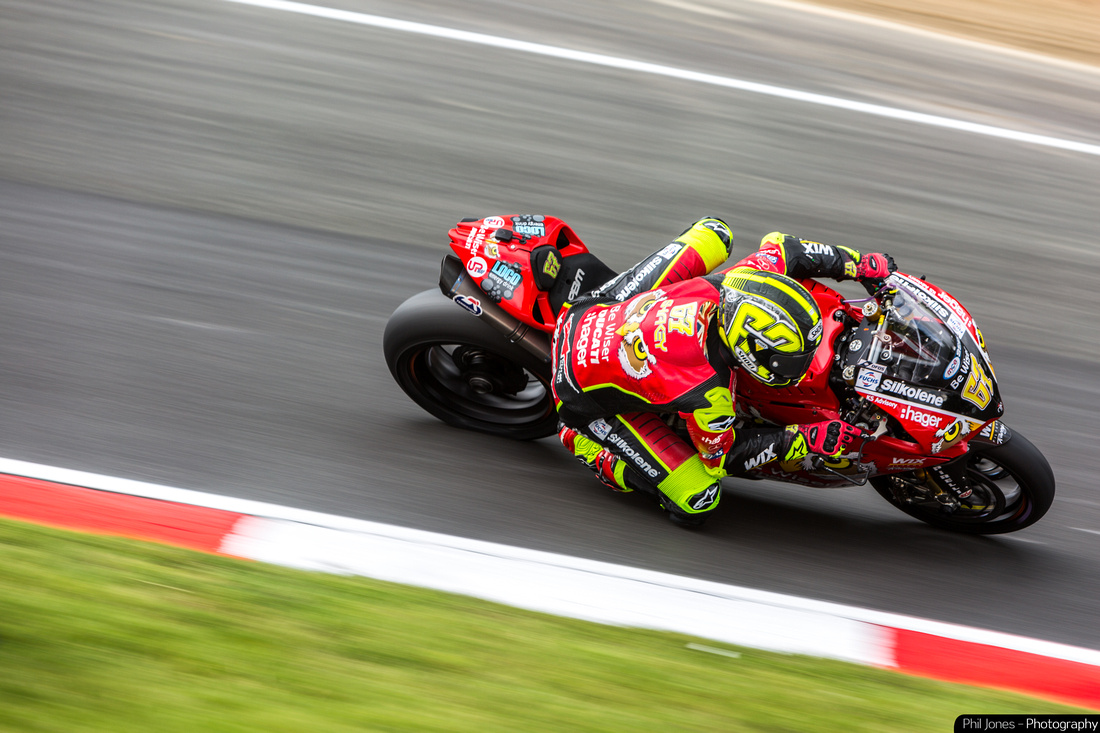 Above: John 'Hopper' Hopkins, Moto Rapido Ducati Panigale R. Shutter speed at Sheen Curve now at 1/2500 second. See how there's no movement on the shadows of the brake discs. Remember the riders are travelling over 100mph at this point of the circuit.

The good thing about shooting with a fast aperture is if an incident does happen which you obviously weren't expecting then you have a better chance of capturing the shot. I found this to be the case during Race 1, Lap 1 of the Pirelli National Superstock 600 Championship when rider James Naggy found himself on the grass and heading for the gravel or cat litter as I call it! Somehow I managed to keep focus as the front end of the bike dug in and cartwheeled. Fortunately, James walked away unhurt although he told me later he was just a little sore!

Below: Just a few images of the incident shot using continuous shooting at 1/1250 sec in shutter priority mode. 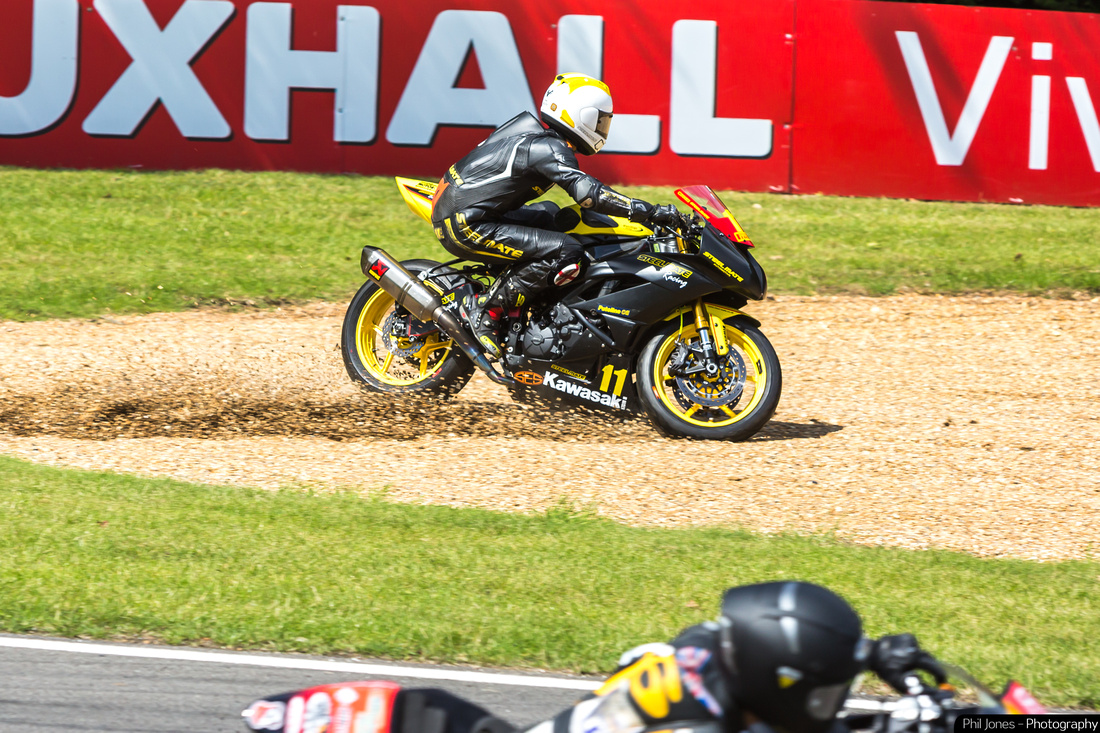 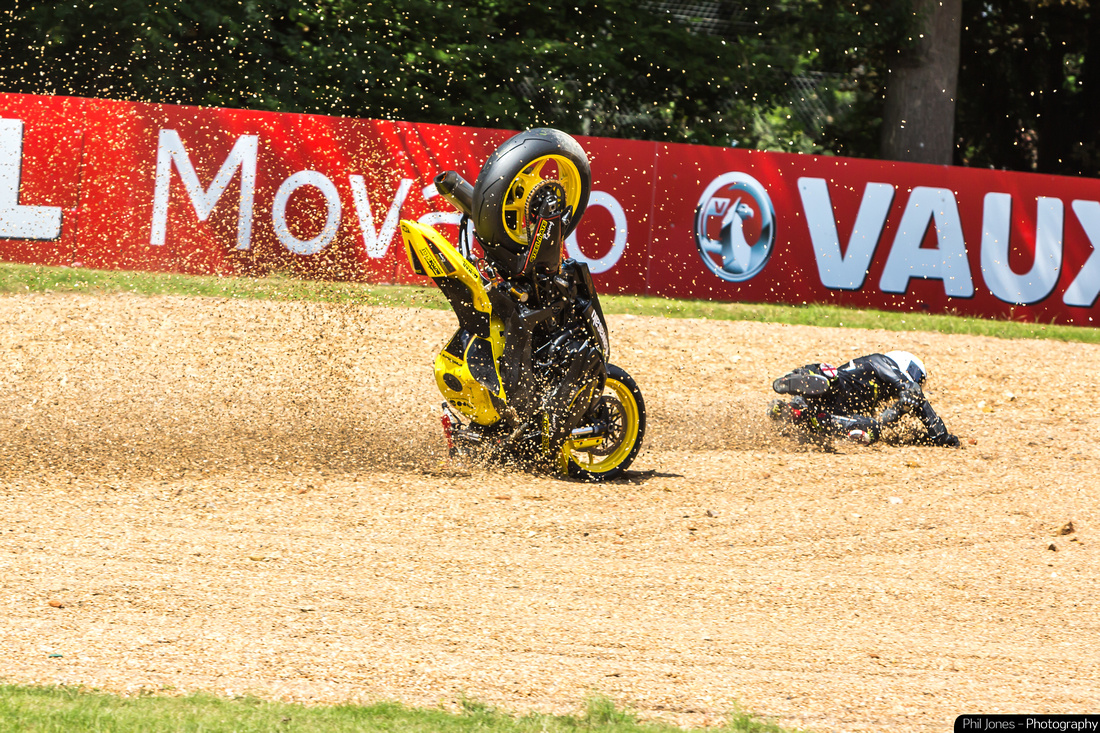 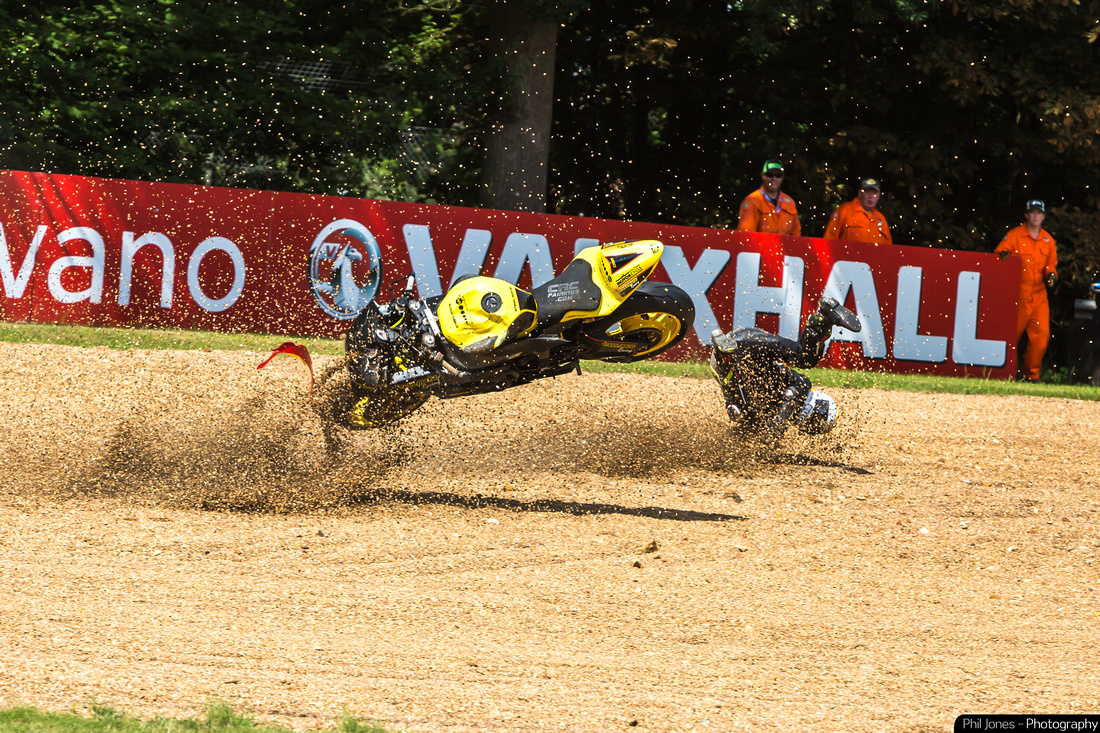 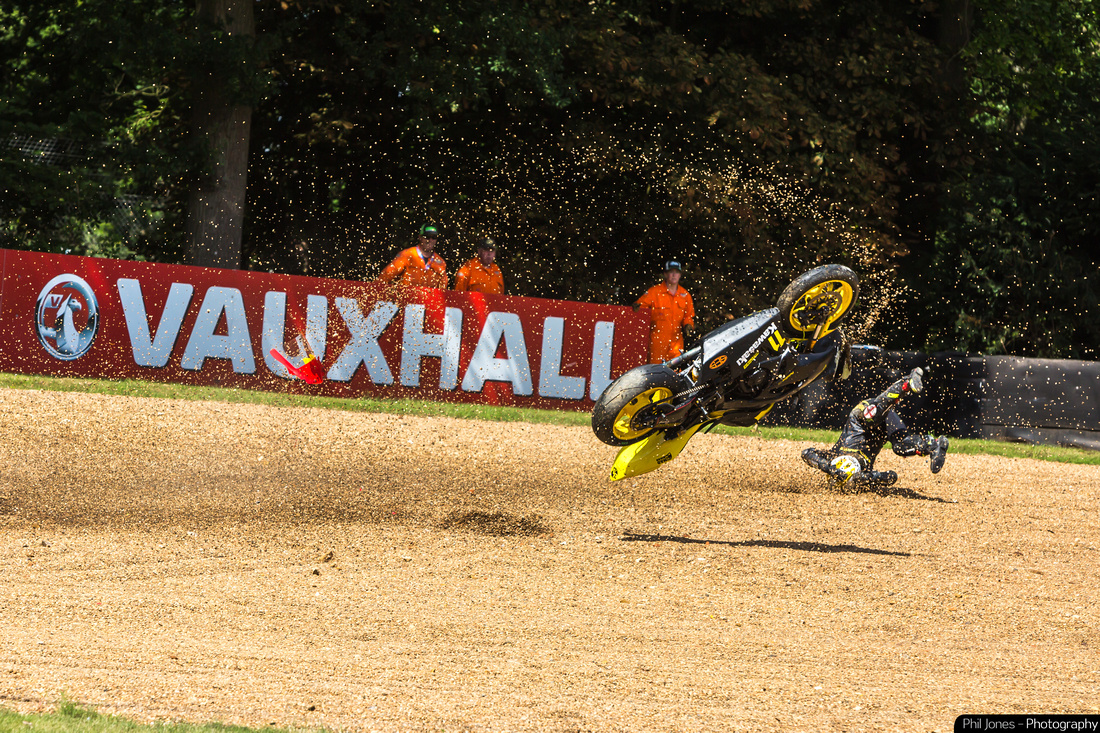 Below are some of my favourite images taken at Sheene Curve, Brands Hatch.

Something I noticed at Brand Hatch was the majority of photographers try to keep high when shooting, many of them take a step ladder. A technique which I use and I must admit I didn't see anyone else doing was to keep myself as low as possible. This makes it difficult at times seeing the riders approaching but it does create a great angle. Of course there were times when I tried to make myself as tall as possible and look down on the riders. Generally the most interesting shots you can get as a photographer are finding angles which you don't want to be in for too long, especially if you have an achy back! 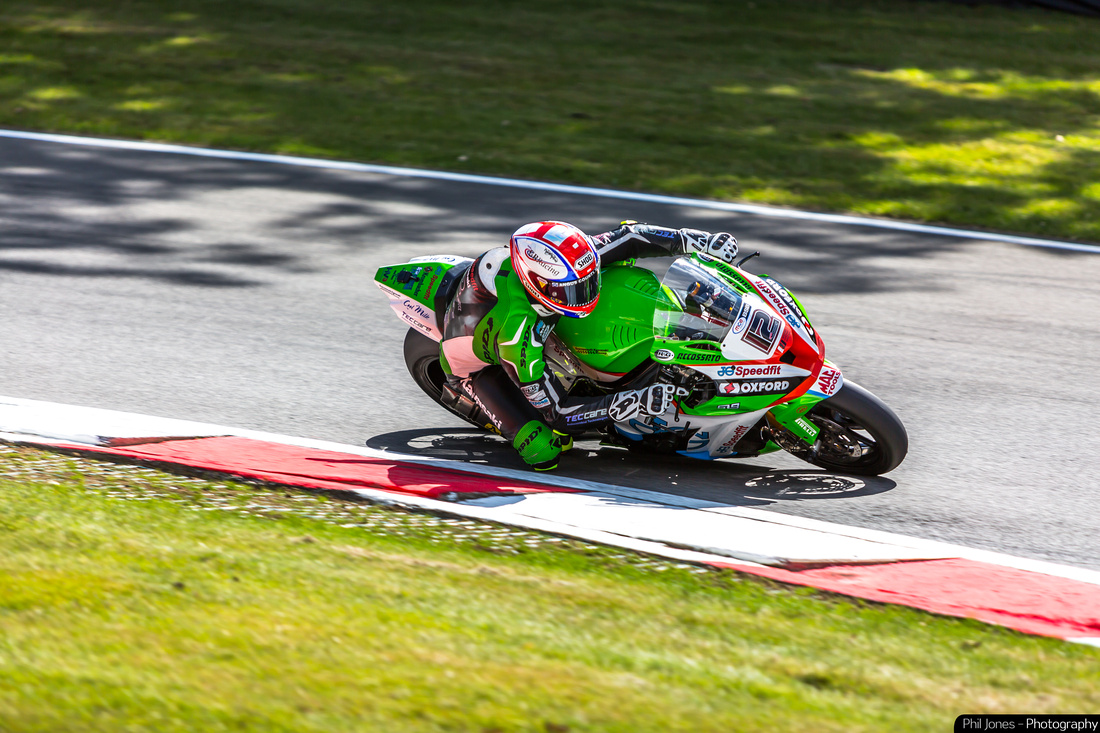 Below: Sylvain Guintoli, Bennetts Suzuki GSX-R 1000 I know I am biased as I now ride a Suzuki but this colour scheme just works doesn't it! 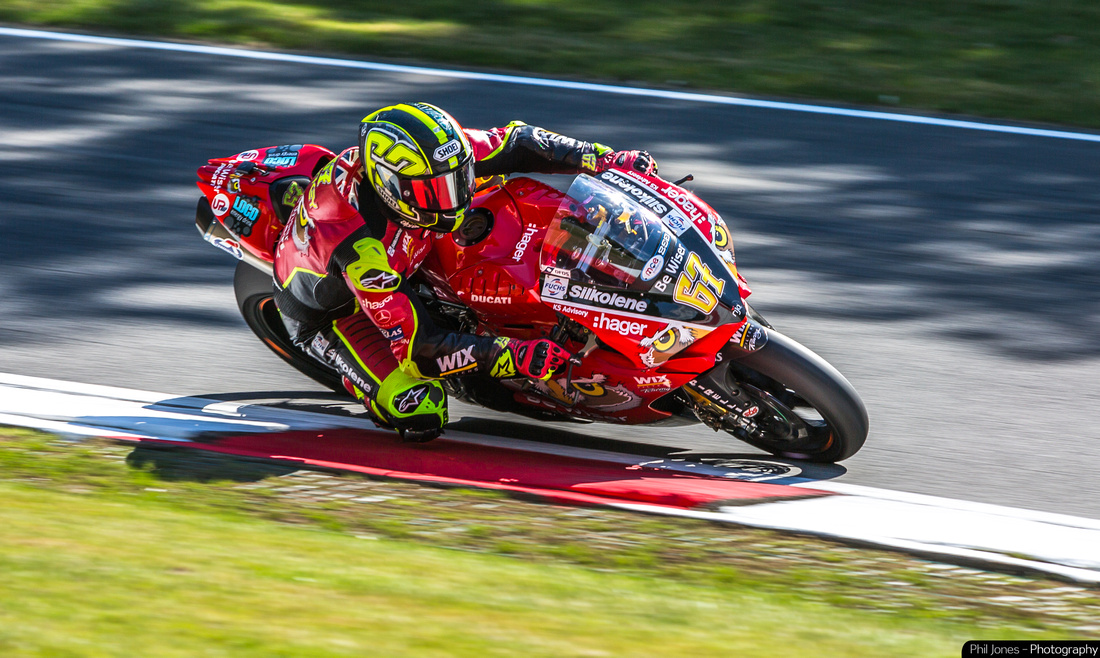 Blue just seems to photograph really well. Jakub Smrz on his BMW S1000RR before he launched it into a fence creating a very dramatic crash, see link below. 1/500 sec 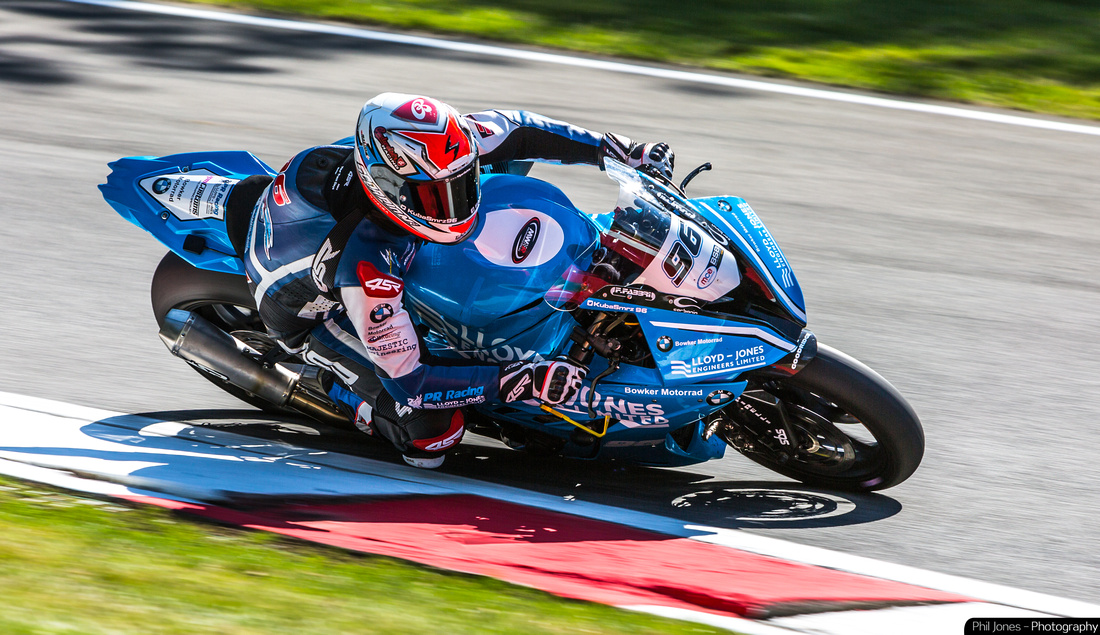 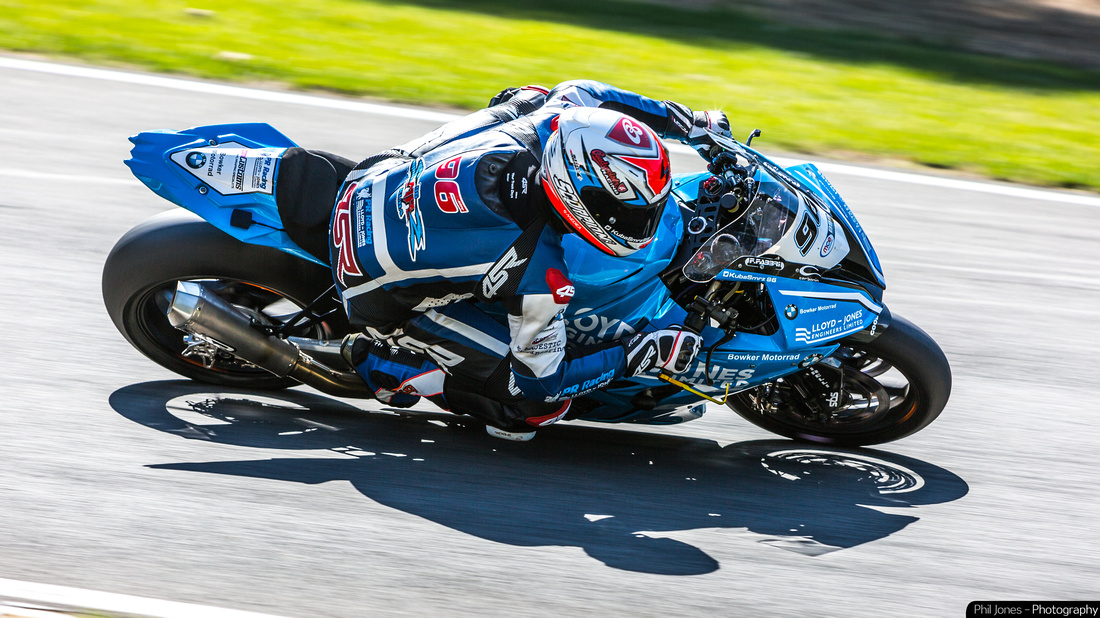 Below: This image of James Ellison really makes it look as though he is travelling at speed, which of course he was! The second image below which I've cropped in tight shows how a slower shutter speed allows for movement in the wheels, tyres and ground adding to the excitement. 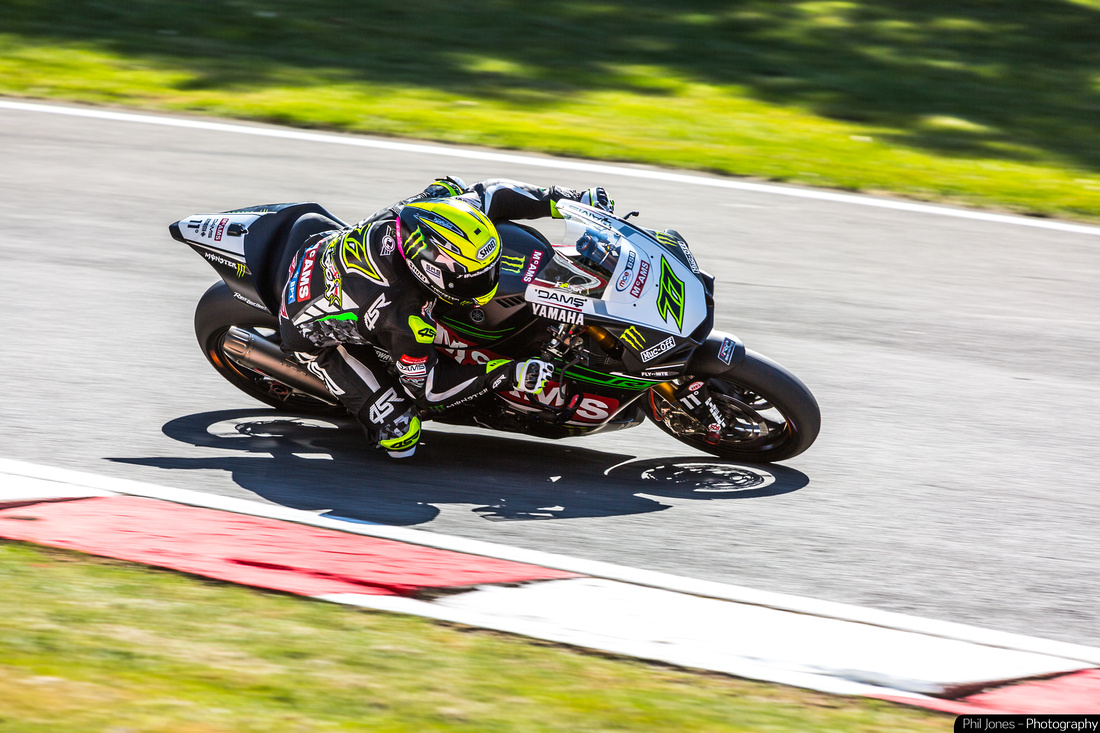 James Ellison, British Superbikeshis image of James Ellison really makes it look as though he is travelling at speed, which of course he was! 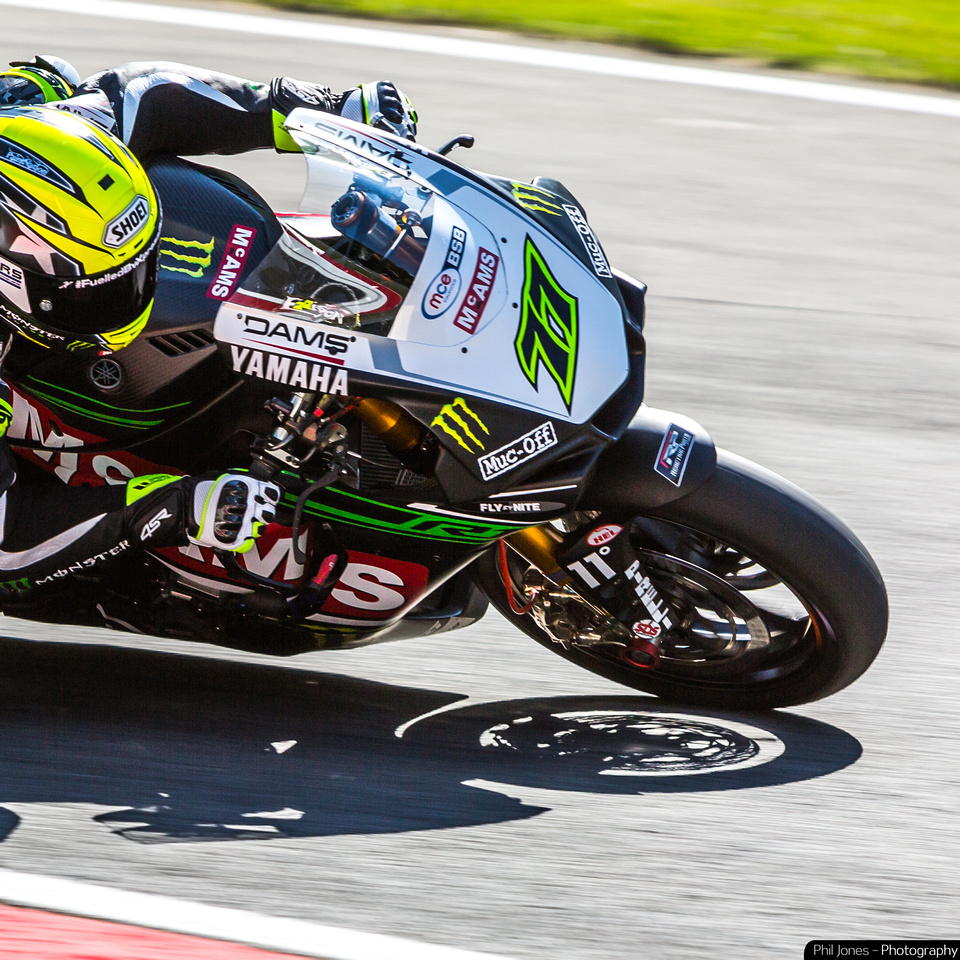 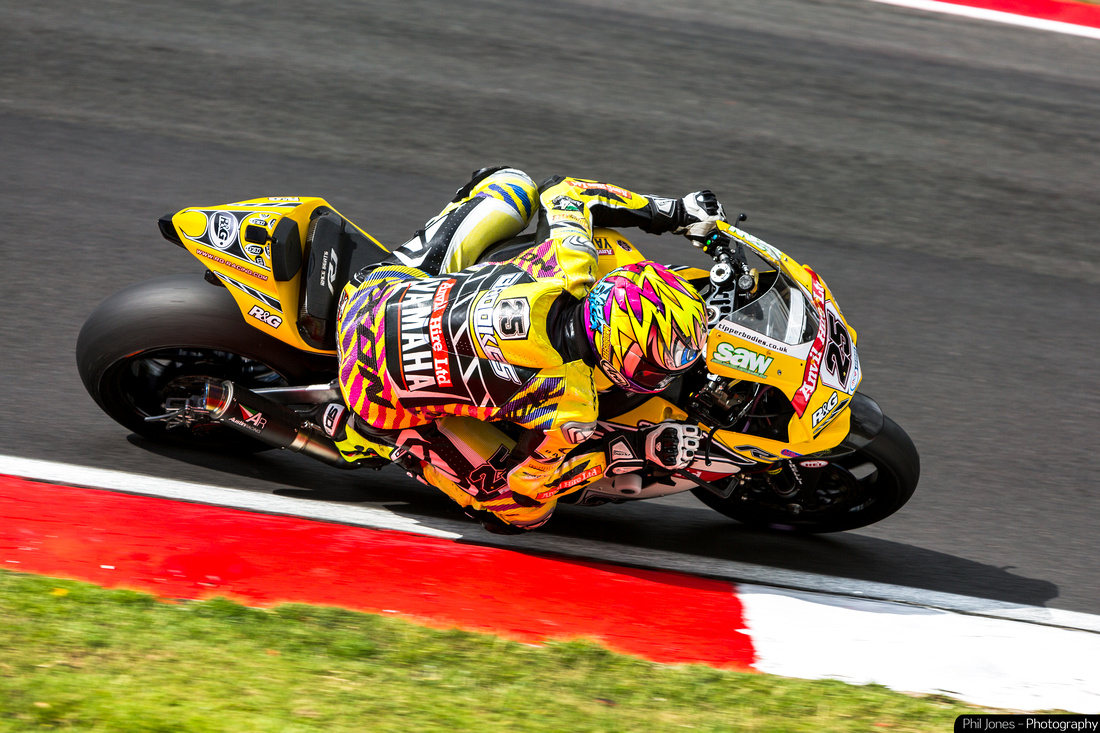 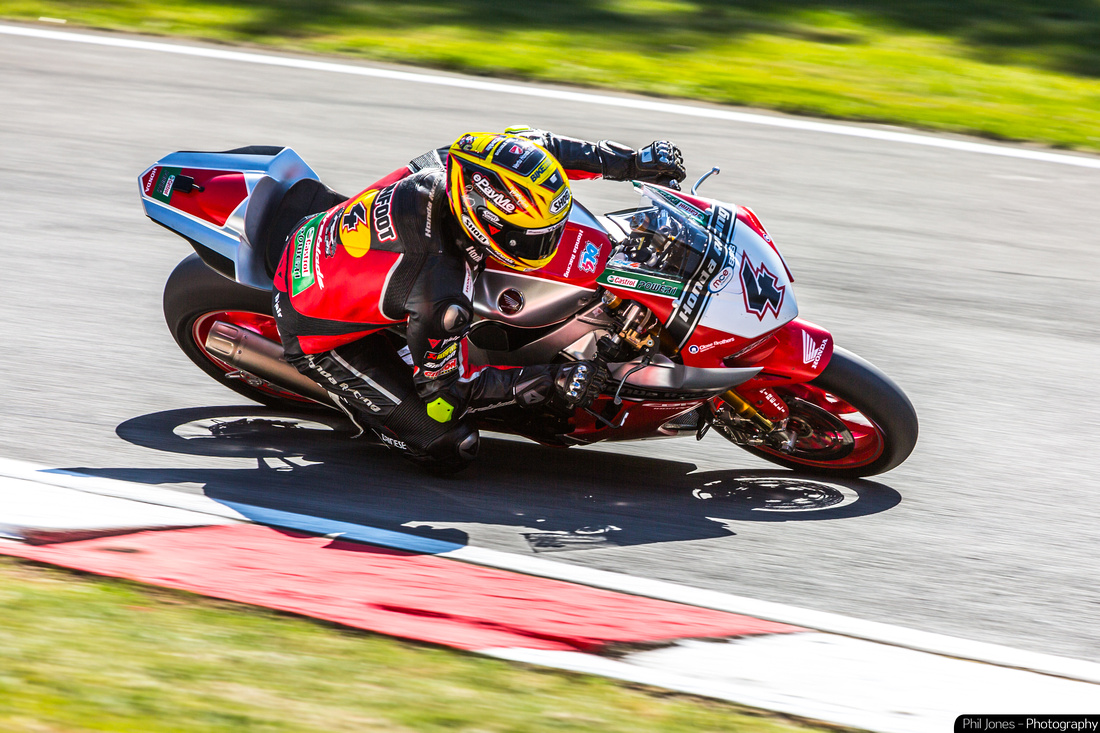 Below: Bradley Ray, not only getting his knee down but his elbow too! Buildbase Suzuki, GSX-R 1000 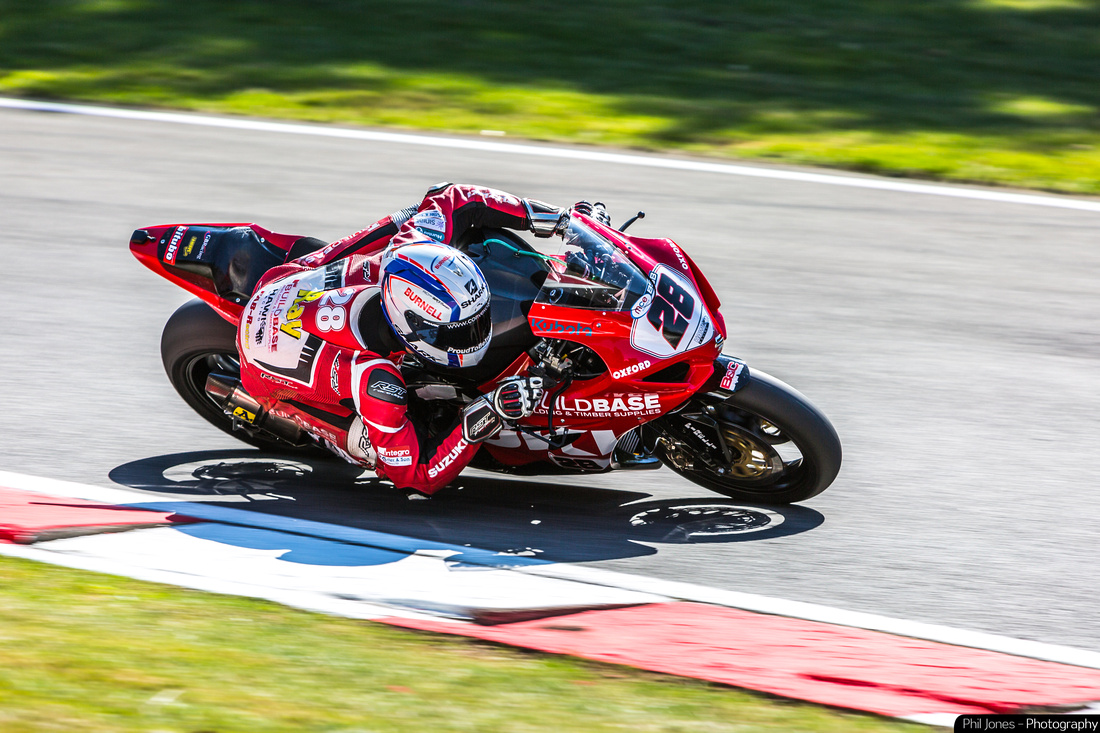 Below: Richard Cooper, in the Pirelli National Superstock 1000 Championship who dominated his class all weekend. 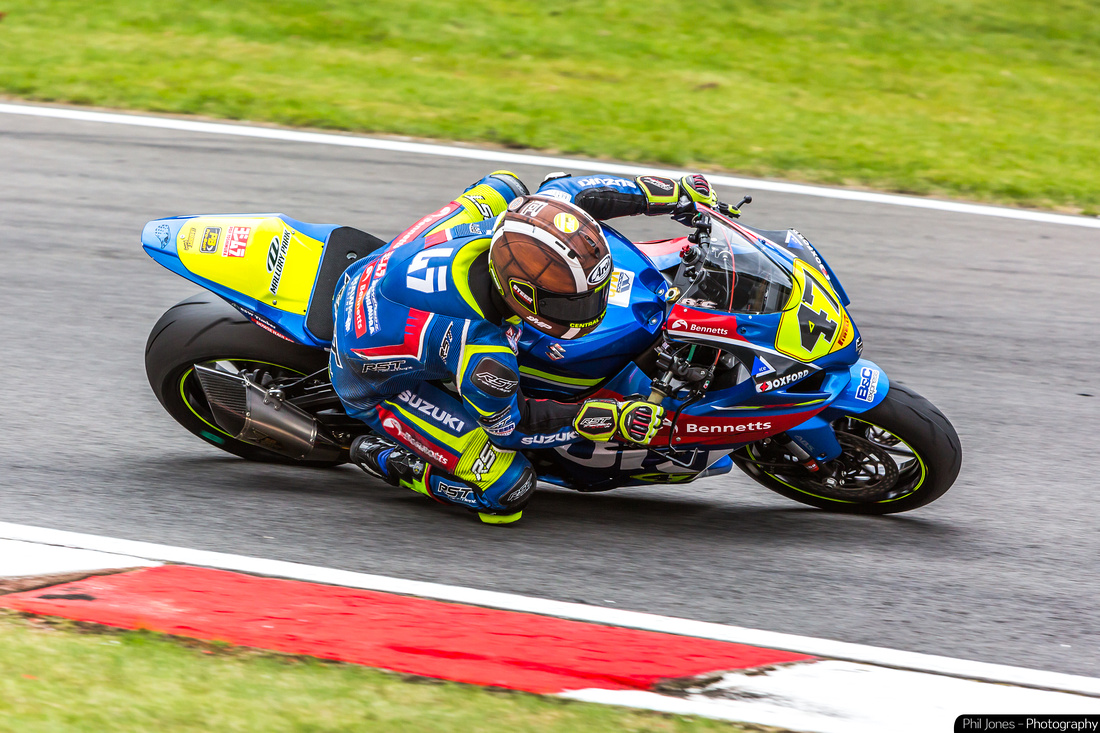 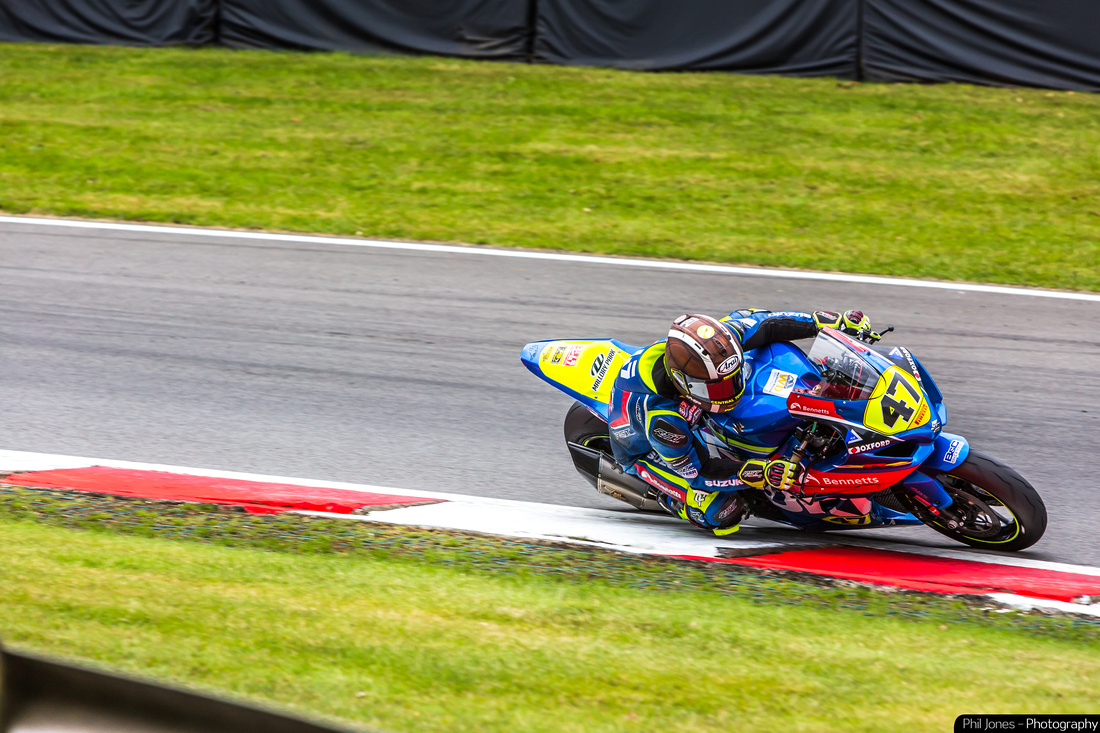 Below: Staying with Superstock 1000's #4 Michael Rutter getting his knee down. What a great sound as you hear the nylon knee pads scraping along the floor. 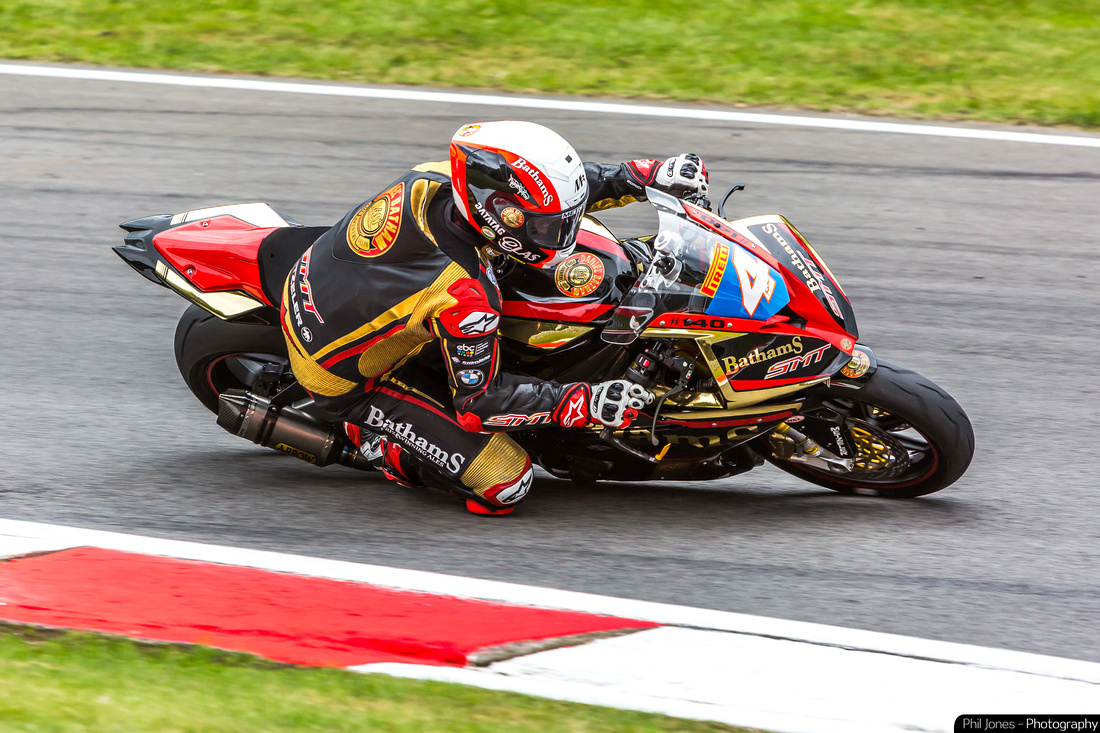 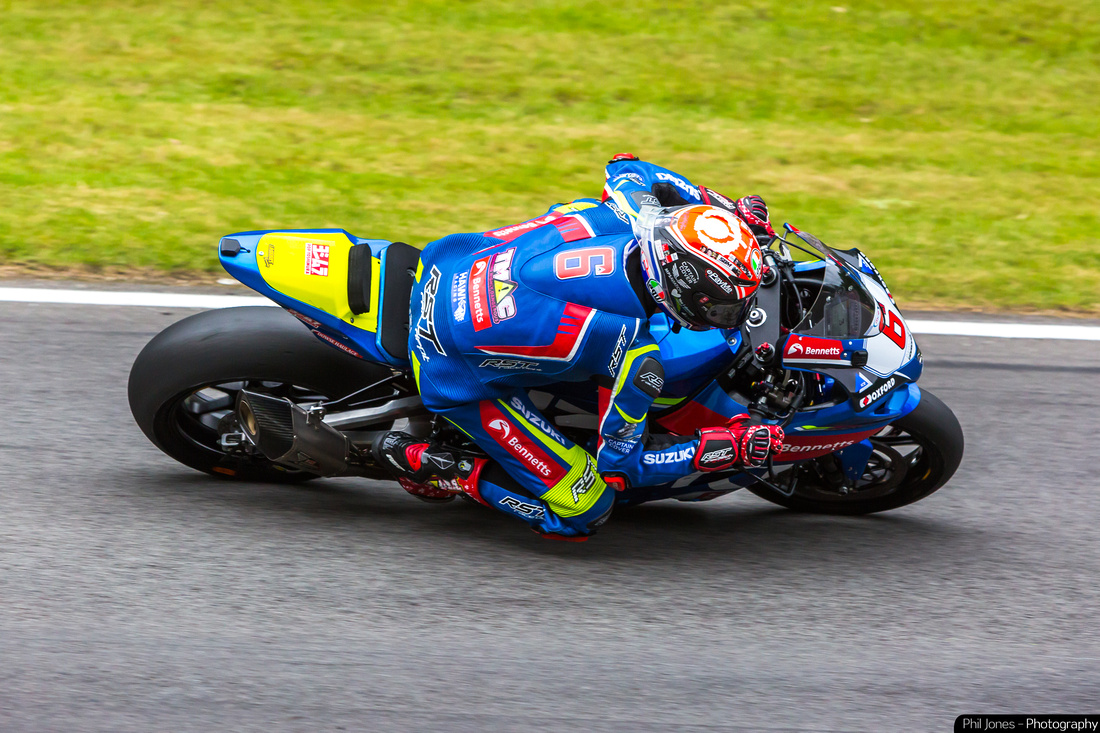 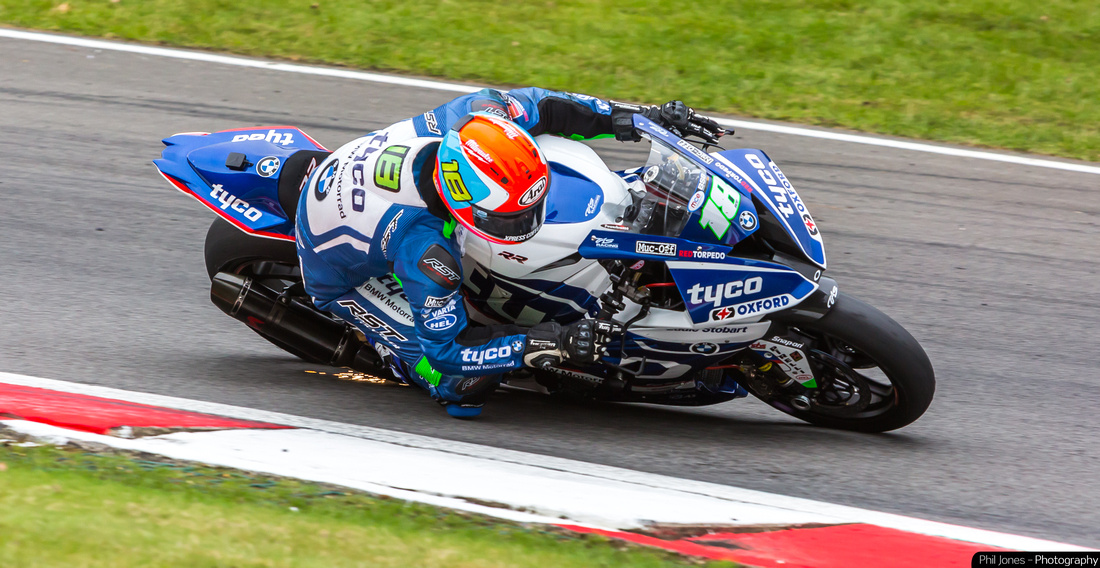 Hopefully, this blog has shown you the sort of results you can get when using different camera settings, of course, they are just a guide as lighting conditions are never the same and that's what makes photography fun. When shooting in the afternoon of day 1 I was worried about having the sun behind the rider creating harsh shadows. One of my favourite shots over the weekend was taken at this time and the sun created an amazing shadow of Sylvain Guintoli (50) and his Bennetts Suzuki. 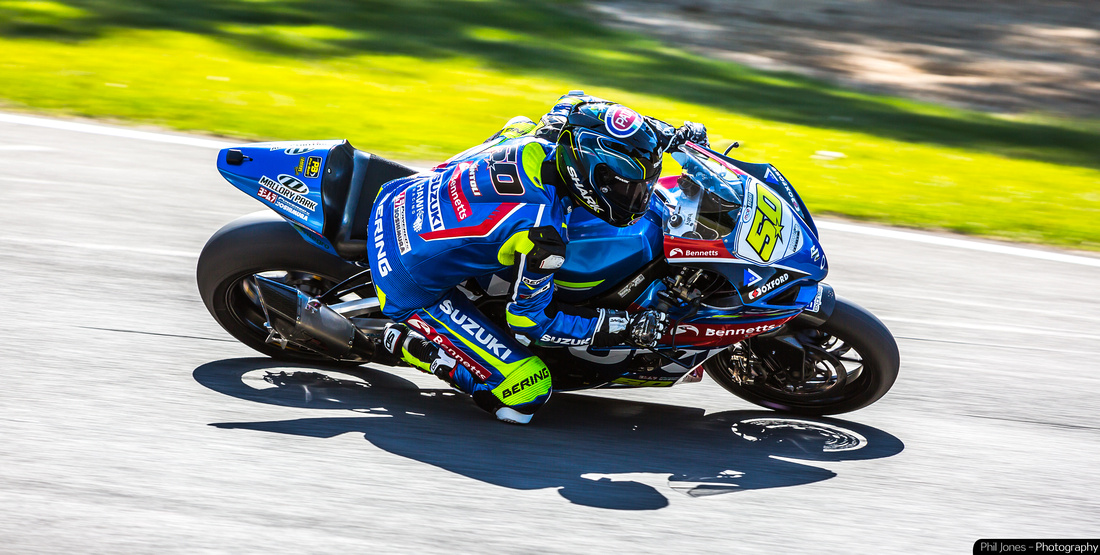 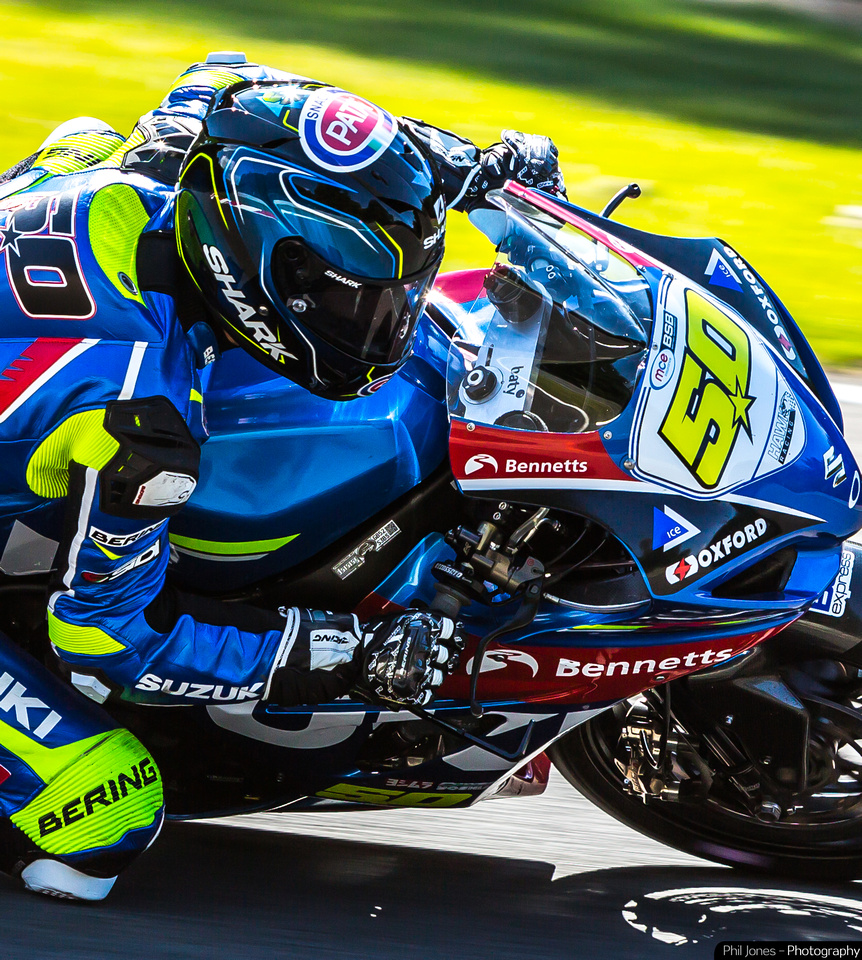 I love the detail in this shot above which I've cropped tight. Image straight out of Adobe Lightroom.

The most important thing about shooting sports photography is the same as when photographing nature, people or fantasy; have fun and shoot what you love! Practice and try different techniques. Don't be afraid to talk to other photographers who are generally happy to pass on a little knowledge and show off their shots, just like me!

If this blog has inspired you to pick up your camera, then take a look at the British Superbike calendar here, who knows, I may even see you at the closing round when they return to Brands Hatch 13-15th October 2017.

All images are copyright of Phil Jones 2017. Please do not use without prior written permission.